Safety vessel is however allowed to provide for safety in the water.

No trash can be thrown in the nature.

To complete SAUC, the following way points have to be passed between the start (A) and finish (B).

It is not allowed to pass over the mainland or a mainland island, who are clearly marked on the official Government map.

It is not allowed to pass over seasonal bird or wildlife protected areas. 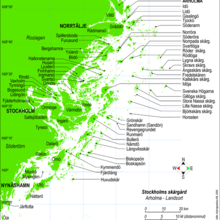 What are some other mega-classic global SwimRun objectives that should be contested here on fastestknowntime.com?