The Western Greenway is located almost entirely inside the triangle bounded on the northeast by Concord Avenue in Lexington and Belmont, on the southeast by the MBTA commuter rail and the now-abandoned Mass Central Rail line, and to the west by Lexington Street in Waltham. To be sure, there has been a significant amount of development inside this triangle. But there are also significant swaths of green space. The green space comprises various parcels, some of which are publicly-owned and have been designated as parks or conservation land. There are other publicly-owned parcels whose future is still undetermined, and there are some undeveloped parcels along the Greenway that are privately-owned.

Some portions of the Greenway have well-established trails that are suitable for walking and hiking. Other portions of the Greenway contain dense vegetation, not to mention thorns, brambles, and poison ivy, making human use all but impossible at this time. One long-term objective of the Waltham Land Trust, together with partner organizations like the Friends of the Western Greenway, is to construct a trail system throughout the entire Western Greenway. This will involve designing the most suitable locations for the trails, obtaining permissions and easements from the various landowners, and performing the work of actually clearing, marking, and maintaining the trails. The Greenway Map identifies the areas with existing trails, and shows the areas where new trails might be constructed in the future.

Jason DeJoannis submitted an out & back route in this complex of trails:

The trail starts in Waltham on Beaver St near the corner of Forest Rd. Follow the green Western Greenway markers north. Cross Trapelo road and head east to Belmont. Cross Walnut street and go through Beaver Brook North Reservation, Rock Meadow, Lone Tree Hill and the Habitat. Exit the Habitat via right on Juniper St left on Somerset leading to the habitat annex entrance on right. Follow markers to post in field at access path. This is the turnaround point. Same route back.

Note that the route on our map shows an extra loop on the west side of the out & back. 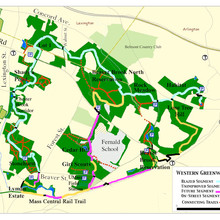 As of 2018, the trail is fully blazed and accessible. From end to end it is 6.84 miles by my tracks. Markers are easily missed in the foliage, or through the Habitat with its crisscrossing trails. Please be respectful of the Habitat as it is an Audubon preserve and has nesting birds and turtles etc. Groups should spread out and go gently, mindful of hikers and animals.

Nice job. Your track is 6.35 miles long since it skips the habitat extension on the eastern end. Otherwise it looks like you managed to follow the blazes perfectly. FYI, you may have noticed that the Google maps marking of the trail does not match the actual blazes for much of the eastern third. In fact, it ends up going down the Snake Hill area to Pleasant St.

I have conflicted feelings about this route as there are signs in the habitat asking people not to run on the trails there.

Me too. I have been running in the Habitat well before I noticed those signs. I think they are worried about big groups of runners coming through. It wouldn't hurt though to ask permission prior to a run and to do it solo.

This is a great chunk of green space tucked into various back yards. I personally think the most elegant route is to run from the Stonehurst terminus and instead of dipping into Habitat, following the blazes down around McLean to Rt 60 and closing the loop on the street (2-3 mi). My time on the loop was nothing impressive and not officially recorded in any way so I can't post it, but I'd recommend using that route (in either direction) for the for Western Greenway FKT rather than the one posted here.

Yes the WG is a great little corridor connecting the parks a suburban area. I have done the route you suggest before. The section from Lone Tree Hill to Pleasant St is not blazed though. That is a point of confusion for many because Google Maps has it incorrectly marked as the Western Greenway.

But I think the Western Greenway FKT should be on the actual WG. It is after all point-to-point trail and making a loop out of it seems a little arbitrary and forced.

BTW, the official endpoints for this FKT should be putting your foot on the carriage road at the southern terminus and touching the blazed post at the northern terminus.

There are plans to extend the Western Greenway on the south side through the Bentley and Lyman properties, so that will be fun.