This the shortest coast to coast crossing of Scotland. The route has been described (east to west) by a cyclist:

The route is a mixture of tarmac, forestry roads and broken tracks - A coast to coast route from Ardgay in the east to Ullapool in the west. I've heard that this is the shortest coast to coast route in Scotland, but I haven't done any measuring to find out if it's true or not !

Once you've dipped your tyres in the seawater at Ardgay, head onto the singletrack road to Gledfield, and carry on straight ahead at tag 1, as the main roadway turns to the right. Follow this road along the south side of Strath Carron until you get to the bridge at Amat, where you cross the river at tag 2.

Turn left once over the bridge and carry on up the glen towards Croick. The tarmac surface turns to a 4x4 track here. Head through the gate at tag 3 and continue along the hardpacked track into Strath Cuileannach. You're climbing all the time here, but very gently, so you don't really notice it thankfully.

Once you get to tag 4 at Lubachoinnich the track gets a lot greener as you pass the buildings, although you can see that it is still very much used by 4x4 vehicles. Progress is straightforward enough on a bike though. About halfway between tags 4 and 5 the trail turns away from the river and starts to climb a bit more, while also becoming a bit softer and grassy. It's still very much a 4x4 track though.

Just as you get to the top of the climb at tag 5 you break out onto another hardpacked track, and going gets a lot easier again, not that it was that difficult beforehand mind you !

Follow this track dowhill to tag 6, and turn left to climb steadily towards Duag Bridge. As you climb this track gets a bit greener again, before joining the hardpacked track at tag 7 on the descent down to the bothy at Duag Bridge, which is a handy spot for lunch, especially when it's raining !

Head on past the bothy over the river, and start the climb up Strath Mulzie before turning hard right up the steep grassy trail at tag 9. There's a tough little climb here up the grassy hillside, before it levels off and starts to descend slowly to the river crossing at tag 10.

Once you've forded the river, continue to the left and head along the track towards Loch an Daimh, where the track forks at tag 11. Take the track on the right and start to slowly climb away from the loch to tag 12 where you start to descend into Glen Achall.

The section from tag 12 to tag 13 is the most technical section of the whole route, where the track has the odd rock strewn about here and there. It even manages to degrade into something approaching singletrack at one point ! A novelty on this route.
It's a fine little descent through some sparse trees with the glen opening up in front of you though.

At tag 13 the track levels out and smooths out considerably as well, as you start to see signs of habitation as you approach the west coast. You've now got a long slow descent as you head along Glen Achall over an ever improving track. Take the right fork at tag 14, and the left at tag 15 and continue west until you reach tag 16, where the descent gets a bit faster.

From tag 16 down to tag 17 you've got a real fast run down a smooth wide track. There could be estate vehicles or quarry vehicles on the road though, so be a bit wary on the corners.

At tag 17 you're back at sea level, plus a few feet. Cross the A835 and head into the village of Ullapool along Old Moss Road. At tag 18 turn right onto Riverside Terrace or you'll just end up on the busy(ish) A835 again.

The red tag at the finish of the route is right outside the Seaforth Inn, but you need to cross the road and dip your tyre into the sea first ! 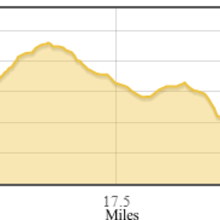 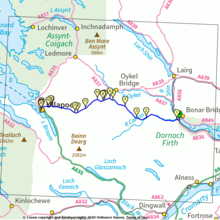