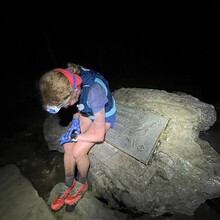 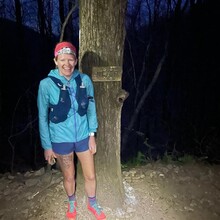 I don't totally remember how I decided to go for the Georgia AT FKT, but it's a trail that's been super special to me for so many years. As a newbie ultra runner, I remember doing my very first mountain run to the top of Springer Mountain and feeling on top of the world. I also had my first rattlesnake encounter there and almost quit trail running, but that's another story. I did my very first ever night run from Woody to Blood and back on a night when we had the Blood Moon, it was big and red and beautiful and I was hooked. So, lots of training runs and lots of memories later, I decided why not run the whole thing in one day?

I headed out after work Friday April 16 to meet the rest of my crew at the air b&b in Blairsville where we were staying. We started the drive to Blue Ridge Gap at 4am on Saturday morning, drove as far as the road allowed and parked the car. We hiked the 3.5 miles to the NC border together, and I started my run at 6:34am Saturday April 17.

The sun came up right within the first mile or two, and the first 9 miles to Dick's Creek Gap flew by and I was feeling good. The temps were right around 50 with only a slight drizzle. I saw my crew there and restocked for the long 16-17 miles trek to Unicoi. I knew the next section would be tough and just settled in and kept moving forward. The views on top of Tray were amazing. I kept trekking and finally made the climb up Rocky Mtn and was making my way down to Unicoi faster than I had expected, and it felt really good to get that section behind me.

After a super quick restock, I was headed out of Unicoi Gap and up Blue Mtn, and that's where I died the first time. I went through a mega low and was really struggling. I slammed 3 gels and a flask of Roctane, hoping the calories would help revive me. I ran into my friend Perrin who was out running and had a quick chat. It was so great to see a friendly face. After a couple miles I started to feel better, and was able cruise a bit on some of the more runnable miles coming into HogPen.

I picked up my first pacer, my coach, at HogPen, and we headed out on what was the only section I had never been on. Boy was that a haul. It was more climbing and rocks than I realized. That 7 miles to Neels Gap was slow going. I was grateful to have someone with me.

We finally made it to Neels Gap where I knew my friend Allison was waiting to pace me. This was a big milestone, only a 50k to go from here to the end, and a friend to do it with me. This is where I run all the time, I felt like I was on my home turf, running it in, and I was really excited for this next section.

After another quick restock, we headed out to climb Blood Mtn, one of my very favorite places, motivated to get some miles in. But my stomach had different plans. I really struggled with nausea during this climb and luckily Allison had some Tums with her that really helped me feel better. After a few miles, I was starting to feel better and we were able to make some decent time to Woody Gap, even managing to beat the sunset!

When we arrived at Woody, I had a surprise visit from my friend Eli, who came all the way from Atlanta just to cheer me on!  I also decided to take the only break of the day, sitting for about 5 min to regroup a bit before heading back out. This stop was really good and helped get me back on track. Allison and I headed back out just as the sun was going down making our way to Gooch Gap. I love night running and this was a fun section for me.

At Gooch, I said bye to Allison, and picked up my coach again who would pace me the rest of the way. The next 8 miles was a grind. I just wanted the miles behind me. It was a slow section with some decent climbs. We saw my crew at Cooper Gap for a quick fluid refill, and then again at Hightower Gap, for the last time. Leaving the last crew stop felt good, just on to the finish from there. My coach did some trail math and thought if we pushed it, we could make it under 20 hrs. This was a big motivator, and put a little pep in my step. The downhill to Three Forks was really nice, and we made up some good time. After that, I was focused on making sure we didn't get turned the wrong way as the BMT crosses the AT several times. We were able to navigate through with no problems, and before I knew it, we were coming into the Springer parking lot. My crew was there and were planning the run the last mile up Springer with us.

That last mile sprint up Springer felt long, but I finally spotted the last BMT crossing, and knew we were close. I completed my run at the summit in 19:43:20. I stopped my watch and cried happy tears while sitting on the plaque, so relieved to be done. What a day! This trail is no joke.

I wanted to sit there for a while and drink a celebratory beer, but the 40 degree weather finally caught up to me and we didn't stay long before making the mile trek back to the car.

Thank you!! Thanks for leading the way!