Dog Mountain is located on Washington side of the Columbia Gorge, about 10 miles east of Stevenson.  The trail has ~2,800 ft of elevation gain and is between 6-7.5 miles roundtrip, depending on which route is taken to the summit.  From the parking lot to the summit, the central route is approximately ~3 miles, the eastern route is ~3.3 miles, and the western route is ~3.7 miles.  People hike or run up the trails in any order (up and down the same route, loops, etc.).  In general, the steepest, shortest central route is the fastest way up and down. [Note:  The central route seems to have a Strava segment, but it shows only 2.5 miles vs. Tom's nominal 3 miles.]

The Northwest Mountain Trail Series held races on Dog Mountain in 2013 and 2014.  For that race, the route went up the eastern trail and came down the western trail for a distance of approximately 7 miles.  The results of all races, the 2013 10K and the 2014 10K/20K/30K, are contained in the link below.  The winner of the 30K also had the fastest time over the 20K.  These are the only results/posted times I can find.  Thus, Patrick Reaves appears to have the fastest known time for the 30K (3 laps) in 3:46:21.  He was also the fastest through the 20K mark, though I don't know what his split was.  I appear to have the fastest known time for the 10K (1 lap) in 59:43.  The results originally included splits for ascent and descent, and I believe my ascent time was 37:21 (or within a few seconds thereof).

This is a very common trail and run, so it's entirely possible there are already faster times for single or multiple laps.  I would be interested to see what other runners have achieved.  A person drove up at the start of the race in 2013 to claim that he had run the ascent in under 24 minutes.  Whether or not that one in particular is true, there are likely fast times out there.  In my experience, the steepest route up and down is approximately 5 minutes faster roundtrip than the route the race followed.  I will attempt to set a new fastest known time for an ascent and single roundtrip on the steepest route later this summer.

Christof Teuscher did 9 laps of the Dog:

Teuscher also did 12 laps of the Dog, for a cleverly named Dodecadog: 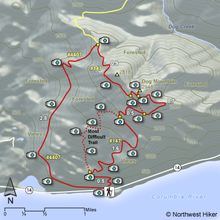 This route on the old FKT site
http://fastestknowntime.proboards.com/thread/1088/dog-mountain-columbia-river-g…

It would be great to start getting FKT's posted here for this route instead of searching around the various routes on Strava. I have been searching the Strava segments along with reading the route description in which Tom Ferrell posts a RT time of 59:4 and I cannot find a faster round trip time than the 58:32 I ran on January 5th, 2019.

This was from the large trail info sign on the east side of the Dog Mountain parking lot to the true summit (past the viewpoint where the majority of people stop) and then back to the sign.

There have been faster ascent times that what I did but they have either been significantly slower on the descent or taken a different, longer way back down, again making the RT time slower.

Lots of other Dog Mt. records at https://www.christofteuscher.com/aagaa/24h-dog-mountain-challenge