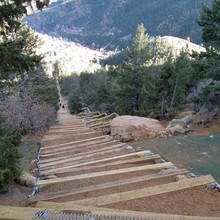 There is no valid, repeatable reason to disregard the times of Mark Fretta, Ryan Bradford, and Apolo Ohno. They are Olympic athletes and the runs were done in the pre-GPS era. Local runners know Joe Gray and Matt Carpenter, and they are both fantastic runners and inspirational athletes. It's easy to want to disregard the performances of some guys that aren't really runners and aren't part of the local running community. However, do we have any more proof of Matt Carpenter's 18:31 than of the Fretta/Bradford/Ohno trio? No. The times of these three athletes should be listed, without asterisks, same as Matt Carpenter.

If it makes sense to start marking ALL pre-GPS FKTs with an asterisk, then there is a lot of work to do. But Fretta, in 2014, addressed the questions that were raised - including whether or not they started from the bottom step.

Anyone who wishes to erase the Fretta/Bradford/Ohno times from the record book needs to explain why, in terms that can be equally and fairly applied to all FKTs of that timeframe. Otherwise, I think you have to accept the word of three Olympic athletes.

Also, for what it's worth, there is a sign posted at the base of the Incline which notes the fastest time as 16:42.