The 9-mile Green Bay Trail runs parallel to Chicago's Metra commuter rail line north of the Chicago city limits. Stretching through North Shore towns such as Kenilworth, Winnetka, and Highland Park, the corridor is flanked by restaurants, shops, community parks and beautiful homes. Because the trail stays generally within a mile of Lake Michigan, you can take any number of on-road side trips for beachfront views of the lake.

The trail is suitable for all runners and walkers, although the route does use some sidewalks and even a very small portion of residential road in Kenilworth. In addition, the surface alternates between asphalt and crushed limestone. This is a true multi-purpose trail. Commuters take the trail to train stations along the way, bikes are allowed on the Metra in limited numbers; children under 16 must be accompanied by an adult when bringing a bicycle, and residents and tourists alike use the trail for exercise and car-free travel between communities.

From the southern trailhead in Wilmette you will immediately experience the fresh air and beach-front atmosphere that is comfortably juxtaposed with the business and commuter traffic. The trail itself is paved and well maintained, accentuating the upscale neighborhoods through which it travels.

By the time you reach the St. John's Avenue trailhead, and northern end of the trail, you will appreciate the many restrooms, public telephones, playgrounds and parks afforded by the proximity of the commuter line. Another bonus of the adjacent rail line: if you are tired after your one-way trip, just hop a Metra train for the return trip. 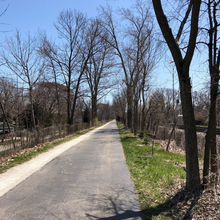 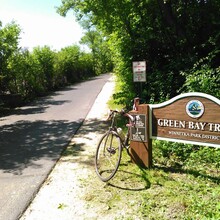 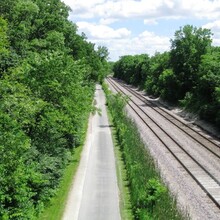 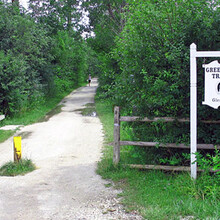 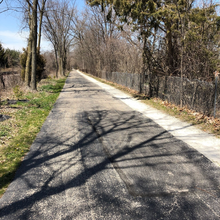 I'm planning on running this route on Thursday, December 2nd, as a one-way, unsupported run. I'm going to start in Highland Park and head south to Wilmette.