The standard route on Half Dome is the Half Dome Cables Route. It runs from the valley floor to the top of the Dome in 8.2 mi (13 km) (via the Mist Trail), with 4,800 ft (1,460 m) of elevation gain. The length and difficulty of the trail used to keep it less crowded than other park trails, but in recent years the trail traffic has grown to as many as 800 people a day. The trail climbs past Vernal and Nevada Falls, then continues into Little Yosemite Valley, then north to the base of the northeast ridge of Half Dome itself. This is the route used by every FKT aspirant prior to Potter, who's more technical route (Snake Dike) is indicated below.

Bill Wright adds some comment on Dean Potter's ascent route: "An old hiking guide I have described an old route up to a lookout up there from which you can see five world-class waterfalls: Upper and Lower Yosemite Falls, Nevada and Vernal Falls, and that the falls - Illiouwet or something like that. It's so steep that it isn't maintained or advertised by the Park anymore, much like the old Cables route on Longs and the Lady Mountain route in Zion. Of course, you have to solo the 6-7 pitch 5.7 of Snake Dike via this route. As that is holdless friction climbing, you don't want to be caught in any rain."

We have 2 Variations for Half Dome:  the "Standard Route" (used by every FKT claimant before Potter, shown on our map) and "Any Route" (e.g., Potter, Elson).  FKTs are TH-to-TH, starting and ending at driveable pavement (at the bridge where the paved footpath meets the driving road).

Rickey Gates and partner Elizabeth Thorp have created a series of custom belt buckles commemorating some of the most iconic and hotly contested FKT routes! Half Dome certainly qualifies. Each buckle is awarded to the FKT holder, and passed on when that FKT is superseded. Currently this buckle is held for Dean Potter by his partner, Jennifer Rapp. Gates & Thorp have not yet made a buckle specifically for women on this route. 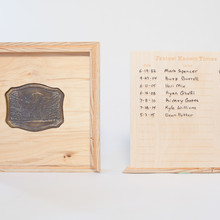 This route on the old FKT site
http://fastestknowntime.proboards.com/thread/264/half-dome-yosemite-ca

New FKT site new comment section, hopefully this can link to the old ones somehow? Anyhow.

I am going to be making an attempt on the round trip Half Dome record tomorrow (May 9, 2018) with a planned departure time at 6am. The cables are currently down, but they might be putting them up which could potentially cause problems getting to the top, but we'll just have to go to find out. I am going to be ascending and descending by the same route Dean Potter descended when he set his record. This is NOT the normal trail route Over 50% of this route is off trail and of the steep, loose, scrambling nature, but it's shorter and the only way a mere mortal like myself has a shot at getting the time. My wife (Natalie Ghelfi) is also going to be making an attempt at the same time on the womans record, she'll be starting with me, but she intends to use the normal all trail route to the summit and back.

We'll see how it goes!

We had a good day overall. I did not break Deans time. I was pretty tired from having done a recon of the route two days before. I still went hard up to the summit (1:31:05), and then I decided to go down and run with Natalie the rest of the way. I'll let her tell her own story, but will mention that she did set a new women's FKT in 3:14:01.

I set out early around 6am with Ryan Ghelfi this morning for the Half dome Fkt. I went up the traditional route and Ryan up the climbers route that Dean Potter had used. I reached the sub dome and saw Ryan descending as I was about to start my climb. He was too far off from the mens time and decided to continue back up for a second summit as I climbed for my first EVER summit. I reached the top in 2:00:30. On the way down I decided to take the climbers trail for the fun of it. And I have a certain proclivity for loops. In hindsight the trail would have been faster for me at that point. The scrambling on tired legs was quite slow. As soon as I was back on a smooth trail my I found my legs again and finished in a time of 3hrs 14min and 1 second. https://www.strava.com/activities/1560582724

Very impressive! I'm looking at the Strava and it's very interesting. As far as I understood Dean Potter performed a different route and he didn't climb the Half Dome from the cable section but from another direction (maybe I'm wrong). I'm not a rock climber so climbing is not an option for me, but I'm wondering about your route. Seems like you eventually joined the Half Dome Trail and ascended to the Sub Dome and then to the Half Dome on the regular cables. But you didn't circumnavigate the Liberty Cap, but cut between Mt Broderick and the Liberty Cap. Could you tell me more details about that section of your route (the "climber's trail")? I wonder how established is that, is that a marked trail? Or is it unmarked but at least an existing trail or you just followed eyeing the route? Would it be beneficial for an FKT to take the "climber's trail" on the way up as well?

I think Dean Potter's "climber's route" is different than the "climber's trail", is that correct?

I assume that section ("climber's trail") was uninhabited by tourists, did you have any anti-bear measures, did you have any anti rattle-snake measures? (I'm not sure how frequent they are, I know bites in other sections of Yosemite, and there are definitely bear sights around this area even when I ascended)

Thanks again for all your hard work in keeping these records, Peter!