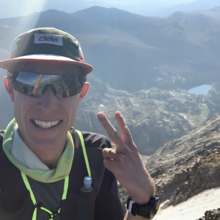 This run was redemption for my intro to trail running: Mummy Madness circa 2012.

In 2012, I did the point to point and after summiting all 6 peaks, I took a wrong turn on Black Canyon trail and ended up at Lumpy Ridge! By this point the temperature increased from 40 to 80+ degrees F. I walked to Safeway (not close, and I didn’t bring money because I thought I would be in the wilderness). I tried to hitch hike and ended up being picked up by the police ? (it’s illegal to hitch in Estes). Estes police can't enter RMNP, so I got a ride from a ranger part of the way back in the park. A nice gentleman gave me a lift the last leg of the journey to my car on old Fall River Road. Craziest day ever!

Today I opted for the Bill Briggs Loop. Great climbs! Lots of route finding. About 10 miles of what I call Mordor (rock hopping hell). All capped off with an insane 1500ft in a mile drop downhill. Oh, and I saw a bear ? on top of mummy mountain! 11/10