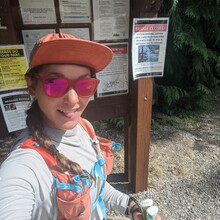 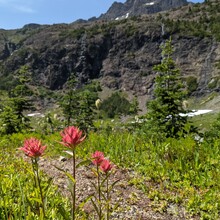 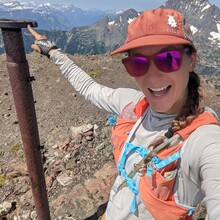 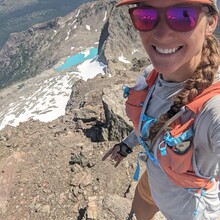 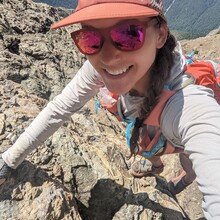 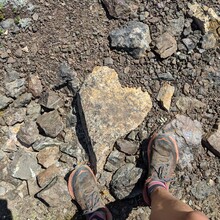 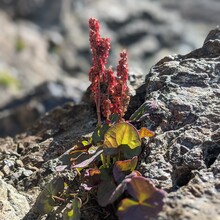 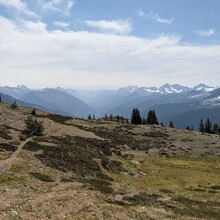 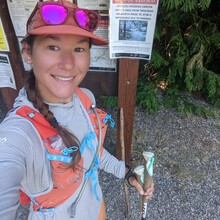 I decided to go for it this peak at the suggestion of Sean O'Rourke, who said it's a super fun, classic climb in the area. I kinda felt like if Dr. Dirtbag thought it was a fun climb, I should probably trust him. I'm glad I did!

I took a late start to the morning. It was the day after Jason and Nate set off into the Chilliwacks during Jason's Bulgers FKT. I figured it was a good time to do it since I had a little bit of time to myself for the first time in weeks.

I decided to cross Canyon Creek close to where the bridge used to be, thinking that I could easily gain the trail on the other side, which appeared to be well used. I ended up dropping back down onto the creek and walking a very short ways upstream because there are a number of trees down on the trail and a large hive of wasps who angrily took to the air when I whispered, "oh, sh**."

The trail switchbacks up and up. It was a warm morning and the smoke from the fires near Winthrop was creeping into the valleys. I passed a few good water sources on the way up, mentally noting where they were in case I ran out of the 1.5 liters of Gnarly Hydrate I was carrying.

I got my first views of Crater Mountain as I got up into the basin. The trail was easy to follow around the lake and up the west side of the mountain. The views got better and better as I moved ever upward.

When I got to the base of the chute with the yellow painted markings, I got super stoked. I left my trekking poles there and worked my way through the short scramble, then up the trail and to the summit.

The views from the summit are phenomenal, with Jack Mountain close by and the Cascades surrounding you. The summit was occupied by thousands of little black wasps and a few ladybugs. Just a few feet down from the summit was clear of any buggy activity, so that's where I sat and ate my summit snack – a peanut butter Snickers.

After a few minutes, I started slow jogging my way back down the summit plateau, scrambled down the rock and loose, chossy chute, snagged my Leki poles, and then gave myself permission to open up my stride on the way down. Much of the trail is very runnable, except the overgrown spots above the lake.

I stopped and filled my water at some snow runoff above the lake before heading back down the many switchbacks. I had a lot of fun on the way down, even hurdling some fallen trees and tearing my favorite Janji shorts on a branch in the process.

It was quite nice to set down the heavy pack I had been carrying for Jason's resupplies and basecamps, and go light and fast. There's a lot of room for improvement in this effort, so I can't wait to see some other ladies throw down on this thing!