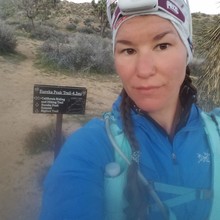 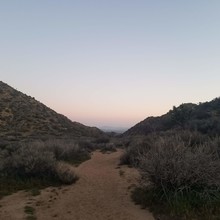 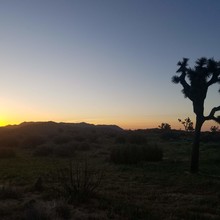 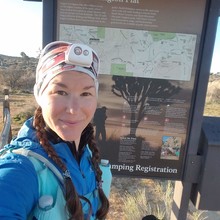 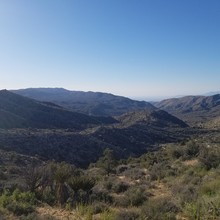 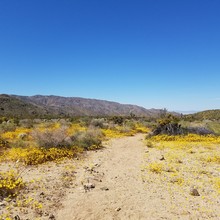 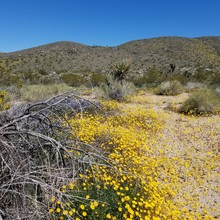 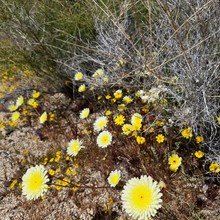 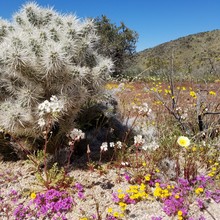 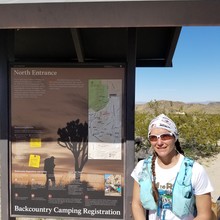 Such a beautiful and challenging course for an unsupported record!
I officially started at 4:46am on Saturday, March 30th after a false-start and having to turn around to get my battery pack and gloves.
It was a frigid morning as I trekked up the first climb out of Black Rock campground.
I implemented the same "carry and cache" technique that was used by Jason and Christoff. I had 6 liters of water with me and about 4,000 calories. As the sun came up, I dropped my first cache of water and food at the Upper Covington Flats trailhead about 8 miles in, along with a layer of clothing.
I dropped caches every 5-10 miles, significantly lightening my load and making it easier to move through the sand.
I felt really good until about mile 32, which was when the day started to get hot. I had dropped a liter of water at mile 30 and ultimately regretted it because I only had about 500 mls to get me through the next 14 miles of heat and sand.
I reached the North Entrance (turnaround point) in 10 hours and 20 minutes.
After a brief rest, I set off for the next 37 miles and I was surprised at how refreshed I felt. An audiobook kept me company for a little while until the sun went down.
The sun set when I was just 4 or 5 miles from Ryan Campground.
Things started falling apart around mile 64 or 65. The pain was intense and I was incredibly tired. In my exhaustion, I started seeing apparitions in the light of my headlamp. Bushes turned into lions and bears, and rocks and plants became giant spiders and frogs. I couldn't walk (let alone run) in a straight line, and I managed a kind of slow, drunken shuffle for the last miles. I felt like I was stuck in loop of never-ending, soul-sucking sand and I wondered if I would ever get out or if I was stuck here forever.
At last, I rounded the last corner and stumbled into the Black Rock trailhead. I dropped my trekking poles and removed my pack. With 74 miles of sand, rock, sweat and tears behind me, I had completed the route and set the women's record for the Joshua Tree Double Traverse at 22 hours, 47 minutes and 13 seconds.
Looking back, I only consumed about 2,500 calories of the 4,000 calories I needed, and I brought about 1 liter too much water (I dumped out about 750 mls around mile 8 so that I didn't have to carry it). I certainly learned my lesson in calorie consumption and I think I would have done a little better at the end if I had not been in such a big calorie deficit.
I would love to try this same route again as a self-supported or supported effort.