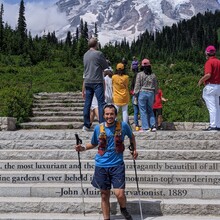 Two days later I can walk and think again. I learned about this route the same way as everyone else, this Dirtbag Diaries episode. I went solo and self-supported, taking the same route as Hardrath and Antin and Sanders.

I took a lot of video clips on my phone and will post a video edit in the next few days.

I started from Paradise at 7:51am. The climb went smooth, I didn’t need crampons and made it into the crater rim around 3:30. I burned some time at the top running over to the false summit and figuring out how to text my dad via Inreach. Once I located the bootpack and put on my Kahtoola KTS crampons, the descent down the Emmons was smooth. I took one wrong turn around 12,500ft to a dead end crevasse, and had to double back. I took the low route around Steamboat Prow and descended the Inter Glacier without crampons. I made it to my cache in site D28 in the White River Campground in 7 hours, ahead of schedule.

I spent 30 minutes refueling and repacking at White River. I had a pair of Black Diamond Distance Spikes back at Paradise but didn’t feel comfortable about descending the Emmons with them, so  I packed my Kahtoola KTSs along for the run. The climb up to Summerland went well. This is my favorite section of the trail.

The first difficulties came in the long downhill to Box Canyon. I viscerally remembered my run of the wonderland trail last Fall. On that trip, I had a lot of trouble in that descent: my knees would burn from the impact, forcing me to walk while my running partner, David, would patiently wait as we got leapfrogged by a determined backpacker. On that same trip, we ran into Christof Teuscher in the middle of his triple-wonderland run. I was surprised by the height of his poles, which I knew he used for propulsion uphill and impact control downhill, in a silly looking "spider run". Feeling the pain again on this trip, I pulled out my poles and “spider ran” my way down that hill. The poles didn't leave my hands for the rest of the trip. I made it back to Paradise around 11pm.

My legs still felt ok for the second climb, but I stopped a lot to mess with my shoes and layering. I was worried about running out of water, as there's not much in liquid form between Pebble Creek and Camp Schurman. Just below Muir Camp, I found a ½-full fruit punch Powerade dropped next to the glissade track. Delta variant be damned, I drank it without hesitation. Above the cleaver, I started to feel dizzy and sleepy, the same way many people do their first time up the mountain. Around 6am, I laid down in the rocks below the summit, 20 feet below a climber doing the same thing. I was envious of their big puffy jacket. I shiver-slept for 10 minutes before crawling over the summit.

The climb down Emmons went really well. Around 13,000 ft. I ran into two Rangers that knew what I was up to. This really boosted my mood, providing some validation to the suffering experienced and impending. In Schurman, a climber named John recognized me from the day before and likewise cheered me up. A few miles from White River, I ran past the Ranger who had granted me my permit. She told me I could drop it off at Paradise rather than White River, where I had registered. This cut out perhaps the most dangerous part of my itinerary, driving a car for an hour after staying awake for two nights.

I reached my campsite at White River at 27 hours and tried unsuccessfully to sleep in my hot tent. I recharged my watch but was dismayed to have forgotten a USB-C cord for my phone. A large group of middle-school boys and their chaperones moved in to the campsite next door. They turned out to be a church group from Tri-Cities, and their leader had a USB-C cord that he would exchange for my empty campsite for the next two nights. This all seemed like a miracle in my frazzled state. I took off up to Sunrise 28 hours in.

Last year we ran this section mostly in the dark, so I was looking forward to the new scenery and views of Liberty Ridge. I stopped many times to put leukotape on my toes. The wildflowers and lakes were so beautiful! I took a wrong turn to the Carbon River Camp and had to double-back across the crazy suspension bridge. At Ipsut Creek, my high was wearing off. I listened to a three hour conversation between Dave Chapell and Joe Rogan and sat down often. This was the only period of the trip where forward progress (even very slow progress) did not seem certain. I reached the pass as darkness closed in and began to look for a mossy nook to hide in. Some day-hikers passed me, and I mumbled an excuse about looking for frogs. I found a boulder 10 feet above the trail and curled up behind it around 9:30pm. Several more chatty groups walked past, and I hoped they wouldn’t see me. I shivered-slept, feeling pretty stupid and pathetic in my thin frogg togg jacket. Around 11:30pm, I got moving again. My legs felt better but I was cold and chafing horribly.

At the South Mowich River I was suprised to find a washout and cable spanning the river. I walked upstream and down, eventually resigned myself to ford the braids below the washout. This was exciting and a good break from pounding along in the dark. The next seven miles up through Golden Lakes were not as fun. I ran out of water and found only muddy lakes and dried up creek beds until a beautiful creek at the start of the descent to the North Puyallup River. The skies got light and I napped for 30 blissful minutes in soft moss of the North Puyallup Camp.

The next miles really flew by. Fields of glacier lilies, stoked thru-hikers, and Kanye West rapping along earbuds. “Sunglasses and Advil, last night was mad real”. I knew if I could reach Longmire by 52 hours, I would have a shot at coming in under Jason’s time. At the Indian Henry Patrol Cabin, around 51 hours in, I saw “7” to Longmire, which put fear in my heart and fresh energy in my legs. I reached Longmire around 52:30, leaving 3 hours to limp the 5.6 miles back up to Paradise. My calves felt like bricks and I was flat out of food. I reached the steps at 2:09pm, 54:17:45 after beginning. It’s a weird place to end this sort of trip, hundreds of people buzzing about. A friendly, middle-aged, woman took my photo in front of the mountain.

On the drive home I listened to the Dirtbag Diaries episode again and became quite emotional at Ras Vaughn recalling himself eating an industrial-sized box of ice cream bars every day and then getting off the couch to hike the Wonderland trail in 21 days with his family. He went on to pioneer the double-Wonderland and Infinity Loop. Intimidating goals have a way of streamlining your life. Chad Kellogg's vision, which Ras and Gavin brought into reality, did that for me this past winter.

I’m sure a stronger runner will go sub-48.

Gu, Shot bloks, Little Debbies oatmeal creme pies, and Snickers. Some fig bars early on, though these became hard to chew and swallow.

Refilled flasks with 300 calories of Tailwind at every transition

Box soup and ramen at the transitions.

Caffeine and ibuprofen pills mostly used in the last 12 hours

“Watch the Throne” by Kanye West and Jay-Z

7 hours for first climb over to White River.

27 over mountain to White River.

MAD PROPS! On an epic effort, so happy to hear this was as moving an experience for you as it was for me. Would love to connect about it! Definitely feel free to reach out!

Jason, Dude! Thanks for reaching out. I had a blast chasing your time around the mountain. Let's connect!

Also, I've posted a video from this trip in the comments of the route.