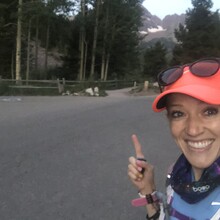 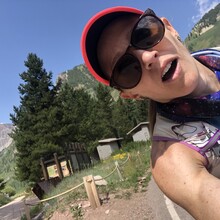 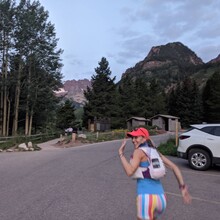 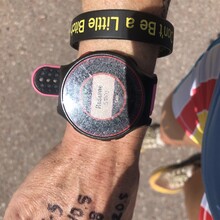 I started the run at 5:57am in the parking lot before getting on to the gravel path towards the Maroon Bells (actual mountains that I had no idea actually existed until just a year ago...a sad fact since I'm a native Coloradoan!). My coach, three friends, and two Texans celebrating their wedding cheered me on as I started the run. Knowing I'd be running this completely solo, in my pack I brought two liters of water with Skratch, 9 Spring Energy gels, one knock-off GoPro camera (epic fail), and one iPhone in airplane mode loaded with pirate podcasts and a downloaded Spotify playlist "Four Pass Loop FKT." I had written the intersections that I needed to keep an eye out for on the inside of my right wrist with Sharpie and then relied on Trail Run Project's map along the way. On my right hand I had also written how many miles each pass's climb was so I knew what to anticipate for mileage.

I knew that the Buckskin Pass was the longest/hardest of them all, so I kept the pace moderate knowing that I had so much more to come. I passed a couple of solo trail runners along the way and one hiker couple that couldn't believe I was trying to break the record today. She kept laughing in disbelief and shouting to her husband how amazing it was! (Thank you for the boost!).

Coming off of the first pass was steep but fun & fast...and what a stunning view with the sunrise! The second climb up Trail Rider Pass was when I changed my phone from podcasts to music. I remember climbing and looking over at the lake to my right and watching it come further and further out of view as I got higher and higher.

The descent off Trail Rider was by far the steepest and where I lost my footing the most. At mile 12 I nailed my right knee on a rock and stumbled to catch my balance but fell off the side of the trail into the bushes/flowers. Around mile 14 as I made my way into the meadow before making the climb up Frigid Air Pass, I remember John Denver's "Rocky Mountain High" on my playlist, so naturally I sang that out loud to myself to keep my spirits high!

The last two miles climbing Frigid Air Pass were super tough physically as the switchbacks got steeper and the sun started to heat up the exposed pass. As I got to the top I made a joke to myself that I wish there was a Frigidaire refrigerator with a cold beverage in it for me (there wasn't).

I had run the "short" miles between Frigid Air and West Maroon a couple of weeks prior so knew what to expect, but by now my energy levels were hitting the hard parts. The last half mile up the steep and rocky West Maroon Pass felt WAY harder than a few weeks ago (obviously), so this was full of power hiking. I knew that once I got to the top of West Maroon I was likely on track for the FKT as long as I just kept moving and watched my footing on the way down.

Right off the descent of West Maroon, I passed two guys on horseback leading two other horses and they also couldn't believe what I was attempting today. They cheered me on with a "yeehaw!" The descent was super technical and mentally challenging given how tired I was, but I managed to keep powering down all the way to a sprint finish back to the parking lot!

My coach and friends ran the entire loop after me, so when I got back to the parking lot, I celebrated by myself and my new Texan friends who had just finished their wedding at the exact same time! An incredible day, an unforgettable run, and an immense amount of gratitude for what I GET to do. Proud of the strong women before me who set the bar HIGH.