The Maroon Bells Four Passes Loop is a 28-mile route in the Elk Mountains near Aspen, Colorado. It circumnavigates the Maroon Bells, through some of the most spectacular scenery in the state. I think it just might be the best run in the entire state! It is a challenging route, with 7,500 feet of climbing and descending, numerous creek crossings, and altitudes up to 12,460 feet. It is normally done as a 3-4 day backpack, but is an outstanding 1-day run for those fit enough. The best time to do the run is probably mid-to-late July, when the snow has melted, wildflowers are going crazy, and there is still plenty of water around.

I have done this route several times. I have run both directions, but prefer counter-clockwise mainly because in that direction the last pass is a piece of cake, and running back to the Maroon Lake TH from West Maroon Pass is more gradual and fun that running down Buckskin Pass.

Prior to Krupicka's run, I had asked local expert Neal Beidleman about the FKT for this run, but he was not able to point to a faster time. Beidleman reported running the loop portion (not including the Crater to Maroon Lake segment) in "just under 5 hours".

*** BELT BUCKLE ROUTE! ***
Rickey Gates and partner Elizabeth Thorp have created a series of custom belt buckles commemorating some of the most iconic and hotly contested FKT routes! This route certainly qualifies. Each buckle is awarded to the FKT holder, and passed on when that FKT is superseded. Currently this buckle is held by Sage Canaday for the men. Gates & Thorp are still working to create a buckle for the women. 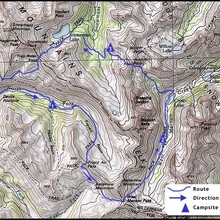 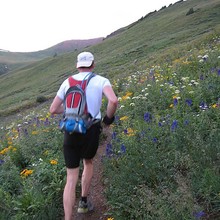 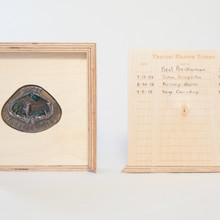 This route on the old FKT site
http://fastestknowntime.proboards.com/thread/22/maroon-bells-passes-loop