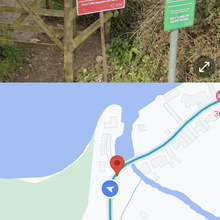 Carl, Ruth, Kevin and Rob started our FKT attempt at the mixed gender team, self supported, anti clockwise circumnavigation of the Isle of Wight at 06:49 on Saturday 3rd July 2021. Stopped at Cafes, shops and bakeries for supplies along the way. At 13:14 just outside Brightstone, Rob completed his first ever marathon. At around 14:35 Rob completed his first ever Ultra (50k). Made it into Ventnor, our overnight stop at 17:24, elapsed time for the day of 10 hours 35 minutes and 56 seconds, stayed in a lovely AirBnB in Ventnor, slept very well.

Back to the coastal path for 06:54 on Sunday 4th July 2021, to complete the run, 9 minutes behind schedule. Heavy legs and lots of niggles meant slow going for the day and at just shy of 100km for the weekend, just outside of Fishbourne, Rob decided to tap out, a spectacularly valiant effort, considering his previous longest run was 35km. With a ferry booked for 16:00 and no option of a later crossing, we needed to be at the finish line at 15:00. At 14:52 the battery on my Garmin gave up and I switched to recording on the Strava app on my phone (hence the 3 separate strava records). We reached the end point at 15:15, a total elapsed time of 32 hours 25 minutes, and somehow made the ferry!

With Rob unfortunately having to pull out the attempt therefore becomes supported rather than self supported. No grumbles about this, it was absolutely the right decision.

It is worth noting that the coastal path in it's entirety no longer actually exists, due to erosion, and there are numerous diversions along the way, which only serve to extend the total distance.

A fantastic time had by all - keep an eye for the movie coming soon: Isle of Blanco - Why Run? (working title)