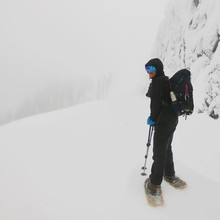 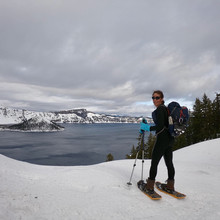 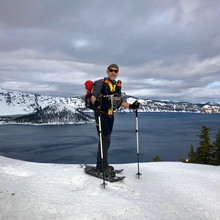 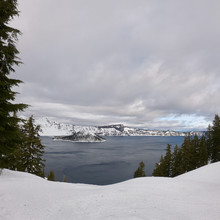 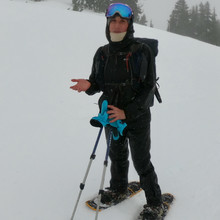 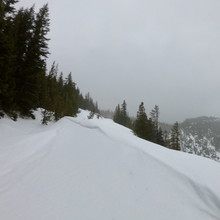 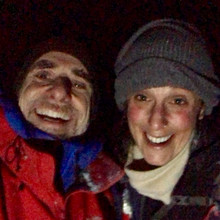 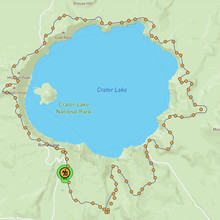 We got backcountry permits at the ranger station at 10am and took off on snowshoes at the Steel Visitor Center at bottom of the rim at about 10:30am on Sat, Feb 1, 2020. Because of the recent warm and wet weather, the snowpack was pretty compacted overall.

We planned to go unsupported and clockwise. Yet, once we reached the top of the rim, we realized the Rim Village Café was open, so we couldn't resist to treat ourselves to an unexpected quick hot chocolate/coffee and a warm chili. Our adventure thus became "self-supported" and we were totally fine with that.

The brief period of precipitation-free weather at the beginning didn't last: a few miles past the Rim Village, it started raining and the wind picked up. We donned rain gear and ski goggles and continued in good spirits. There was nonstop rain, snow, and gale-force winds until the very end.

It was challenging to stay warm and dry. Once it got dark, the temperature dropped and it started snowing. Every piece of our gear and clothing that was wet from the rain ended up frozen.

Because of the gale-force winds and the blowing snow, navigation at night was challenging in the more open areas in higher elevations. We sometimes had to fully rely on the GPS.

We only took the Sun Notch avalanche detour. It's questionable whether it was necessary as the snowpack was well solidified and frozen rock solid when we passed the avalanche sections. The Sun Notch detour cost us perhaps an extra 40min or so.

We reached the car shortly before 2:30am, after spending 15h51min in rather miserable conditions. Although we had carried a stove to melt snow, we never actually used it.

The drive home was survived was made possible thanks to gas station coffee and a 5min power nap.