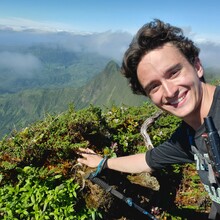 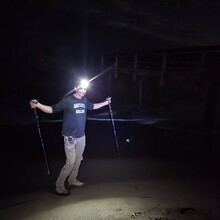 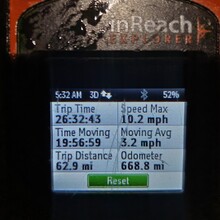 Kauai, sea to summit...and back! I would say it was fun, but let's be honest, sinking knee deep in decaying muck is just not that great compared to sitting on the beach at Poipu. But, I'm glad I did it, and I was totally blessed to get an insanely good weather window with stunning views into the Blue Hole cirque and not a drop of rain during the whole trek! Having a week+ of clear weather is almost unheard of on Kauai, especially on Kawaikini, where the rain gauge records an average of more than 1 inch of rain per day.

I dreamed up this route over the past few weeks. As I was preparing for a "normal" ascent of Kawaikini, I realized that the trailhead was so high, it was more like hiking across the mountain than climbing up it. Thus was born an idea: Kawaikini from sea level! Initially, I wanted to climb up a bluff from Polihale to Ha'ele'ele Ridge, or maybe even look for a route from Kalalau, but on a recon tour I ruled out these options and realized that the road was a feasible (albeit long) alternative.

After a fitful few hours of sleep, I touched the ocean on the beach next to the Waimea Landing State Recreation Pier just after midnight on January 11. I hiked 15.7 miles up HI 550 to the Kumuela Road junction, where I met my parents who had kindly agreed to support me on this venture. After resting for a bit in the car and resupplying, I headed out for the long round-trip to Kawaikini and back (my next resupply would be at this same point). The dirt road went by quickly in the dark, though I tried to savor the wide, solid path while it lasted--pictures of wild hogs the size of couches and adventurers stuck neck-deep in mud filled my mind as I approached the the start of the infamous Alaka'i Swamp. I lost some time around sunrise on the first bit of the Mohihi-Wai'alae Trail, as the routefinding is tricky through the bushes, and a side-trail leads to a USGS stream gaging station. My feet were soaked within the first half mile of the trail because the grasses and ferns were all wet from the previous day's rain shower. The routefinding was further complicated by many side-trails and bits of colored flagging that diverged from the main path to Koai'e Stream. The creek crossing itself was trivial since there had been so little rain.

I stopped for a break at the Koai'e Camp hut, a rudimentary shack used by hunters, scientists, and the fence construction crew. I was surprised to find that the hallowed "pig fence" (also meant for goats and deer) had been extended almost all the way to Koai'e Camp, and before long, I passed 4 people working on building the fence. The 1-mile bushwhack to reach Sincocks Bog had similarly been converted to a fence, which I was thrilled to encounter and follow. From Sincocks Bog to Kapoki, the terrain got a lot worse, with endless muddy spots to sink into, steep muddy rock sections to climb, and a pervasive rotting smell. Eventually, the views opened up, and I found myself on the vast expanse of the Wai'ale'ale summit ridge--truly a surreal place, with grass meadows, small streams, pools of standing water, and even a krumholtz version of the 'Ohi'a Lehua tree, its flower only reaching a few inches above the ground.

I found my way to the summit hill around noon, where I touched the highest point and enjoyed watching the helicopter tours circle the waterfalls of the Blue Hole a thousand feet below. I could see from the crashing waves of Barking Sands Beach to the ocean far past Lihue. Waimea Canyon and the ridge I ascended were barely visible as hazy outlines in the distance, and the Waimea shoreline was almost imperceptible far, far away. I had full 4G service on the summit and enjoyed talking to my parents and sharing pictures with people. It was a super cool place to see, and I wish I could have spent more time up there, but it was a loooong way down, and I wanted to get going.

The descent through the Alaka'i Swamp consisted of mind-numbing bog slogging for hours, punctuated by occasional snack breaks and an enjoyable chat with the fence-building crew. They kindly let me take a couple of the disposable water bottles from their large case at Koai'e Camp since I had underestimated how much I would drink in the unusually sunny weather. I made it back to the trailhead a bit before sunset, and spent the better part of an hour resting and mentally recovering from the swamp once I got back to the car resupply point at Kumuela Road. There, I got to borrow my dad's dry shoes to walk down in, which helped save what was left of my feet (they had become quite wrinkly and uncomfortable from soaking all day). My mom also joined me to chat and hike the remaining road miles. We split the descent of HI 550 into 4 roughly equal sections, after each of which I would get a few minutes of rest and snacks at the car, which my dad kindly shuttled down the road. At this point, sleep deprivation, blistered/pruney feet, and pulled thigh/groin muscles (from leaping over obstacles in the bog) were my main concerns; while the going was slow, I managed to keep plugging and slowly made my way down past the all-too-familiar landmarks of Waimea Canyon. At long last, I once again walked past the Waimea pier and touched the Pacific Ocean, completing my round-trip of Kawaikini from sea level.

After the Kawaikini outing, I took it a little easier, with some much-needed beach rest and a few fun hikes (Kalalau Trail to Hanakapi'ai and Nounou Mountain). The weather continued to sustain a crazy streak of no rain and few clouds, and I could see Kawaikini towering above the island every day. It's a special mountain, and I wish well to all those who visit this place. Thanks to all those who supported me, near and far, especially my parents, whose tireless resupply and pacing efforts made the Waimea Canyon descent possible. Aloha!