Kawaikini is the highest point on the Hawaiian island of Kauai, at an elevation of 5,243 feet above sea level. The summit area is known for being one of the rainiest places on Earth, and a nearby rain gauge shows an average annual rainfall of more than 30 feet (373 inches). Additionally, Kawaikini is known for being the least accessible of the major Hawaiian island highpoints: there is no official trail, and the summit is guarded by practically impassable cliffs on the north, east, and south sides, with the infamous Alaka'i Swamp guarding the west side. Hundreds of years ago, the Hawaiian people climbed to a lake near the summit called Wai'ale'ale, but their ridge route has long been lost to the forest. Today, the Kauai guidebook simply states "you can't" in reference to the question "how do I hike to Wai'ale'ale," and there are plenty of reports of people who have disappeared in the Alaka'i Swamp or who have been rescued by helicopter. In recent decades however, the installation of a metal fence through most of the Alaka'i (designed to keep pigs, goats, and deer out of the forest preserve) has enabled intrepid hikers to pioneer a new summit route, starting from the Mohihi-Wai'alae Trail and following the edge of the fence to the summit ridge. This route is still very serious and a totally different kind of hiking than almost anywhere else--navigation is nearly impossible when you can't see more than 20 feet through the dense swamp (where everything looks identical for 10 miles in any direction), even satellite trackers can't get reception under the densest parts of the canopy, and almost all clothing and gear will be completely soaked within a few hours (even if it's not raining, since the ground and plants hold so much water). It is a truly extraordinary place to visit, but respect the swamp.

The usual way to hike Kawaikini these days is to start from the end of the Mohihi-Camp 10 Road, or from HI 550 if one lacks a 4wd vehicle, and the roundtrip from the trailhead could be established as one variation of the Kawaikini FKT. However, the trailhead is already more than halfway up the peak, and most of the Hawaiian island highpoints seem to have FKTs of one sort or another starting at sea level. Indeed, it is undeniable that there is something aesthetic about climbing a mountain "from the bottom to the top," especially for island highpoints. Thus, this FKT is for the round-trip climb of Kawaikini from sea level, starting and ending on the beach. For the adventurous and slightly insane, such an undertaking is a memorable affair involving pleasant road hiking, magical jungle trails, swamp slogging, and (if you're lucky to go on a sunny day) breathtaking views of the Garden Island.

Since the jungles and swamps of Kauai are so dense, there is very little opportunity to be creative with route choices. Only one road penetrates the upper reaches of the mountain: HI 550, starting in the historic seaside town of Waimea (where Captain Cook landed in 1778). This two-lane paved road follows a winding path along the edge of the Waimea Canyon (called the Grand Canyon of the Pacific), eventually providing access to the same dirt road and trail system used by other hikers to approach Kawaikini. For the climb itself, plenty of trip reports can be found on the web (Peakbagger.com, linked above, is a good starting point). The following summary gives a brief overview and is not intended to be a complete guide to navigating this complex route.

Start by touching the ocean on the beach near the Waimea Recreational Pier, then walk through the town of Waimea and start hiking up HI 550. The road ascends relentlessly for the first 10 miles, then levels out and follows the canyon rim. Near mile 15.7 (measured starting from the beach), turn right onto Kumuela Road (unsigned). This gravel road is the new way of accessing the Mohihi-Camp 10 Road since the latter's connection to HI 550 is closed. After about a mile, Kumuela Road indistinguishably merges into the Mohihi-Camp 10 Road; follow this gravel road about another 5 miles over several bridges and one unbridged stream to where it ends near some picnic tables at the start of the Mohihi-Wai'alae Trail. Follow this trail 4 miles to Koai'e Stream; routefinding can be tricky at times as the trail undulates around various small ridges, but the path should always be mostly clear. Crossing Koai'e Stream involves a steep descent/ascent of the creek's gorge (hand-lines and ladders may be fixed on parts of the trail), and the creek ford can be challenging or impossible during periods of high flow. Just past the creek, pass the Koai'e Camp hut and keep hiking the Mohihi-Wai'alae Trail as it ascends out of the gorge. Near this point, the pig/goat/deer fence begins following the trail's path, and walking along the edge of the fence usually affords comparatively easier travel. At a crucial fence junction (see tracks and waypoints), follow the left fence a mile southeast to Sincocks Bog, then follow the right-hand fence along the south side of the bog. In general, keep following the fence over innumerable hills and through endless swampy bogs all the way to the summit ridge of Kawaikini (a GPS is particularly useful for finding the right direction at multiple fence junctions). Eventually, the dense forest gives way to a marshy summit meadow, and the route traverses cross-country near the edge of the Blue Hole box canyon to reach the Kawaikini highpoint (accurately located on Peakbagger and Lists of John, a bit farther north than the lower-elevation benchmark marked on the map). You are now more than 30 miles from the beach, and there's more than 11 miles of swamp just to get back to the dirt road--enjoy the slog, and consider switching into dry shoes when you return to HI 550. The clock stops when you touch the ocean back on the Waimea beach.

The accompanying photos show views along the Kawaikini sea-to-summit route on a rare blue-sky day. The photos show: view into the Blue Hole canyon/cirque from the summit of Kawaikini; town of Waimea and the Pacific Ocean; Waimea Canyon with Kawaikini in the very far distance; Koai'e Stream on a low-flow day; a representative section of fence with characteristic swamp plants; distant summits rising above the Alaka'i Swamp. 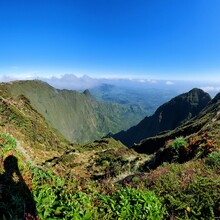 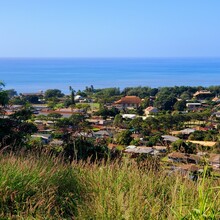 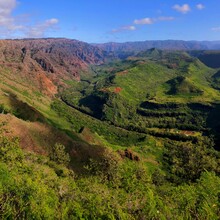 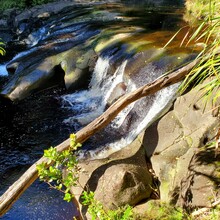 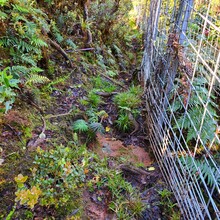 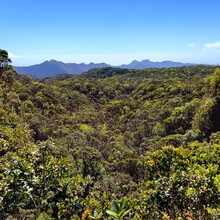