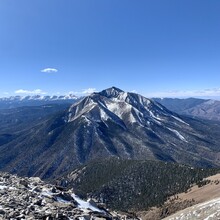 East Spanish Peak mixed-gender team FKT. No food/ water needed. Spontaneous decision to do this one. We were in search of peaks with good weather windows and figured we might as well push for this one. There was quite a bit of snow on the trail especially below treeline, however there was already one set of established tracks which prevented us from postholing even more. Given the trail conditions, there is a lot of room to shave off time but we wanted to at least get the ball rolling for this one. The spanish peaks are underrated gems of southern Colorado!