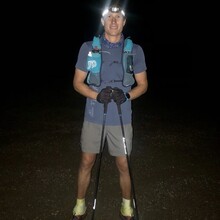 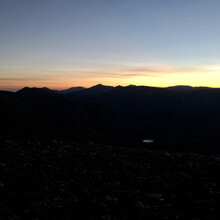 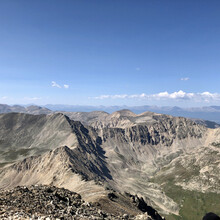 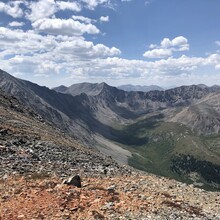 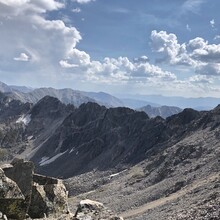 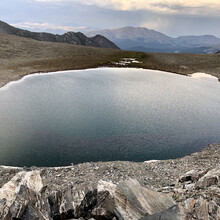 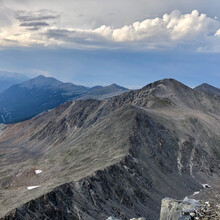 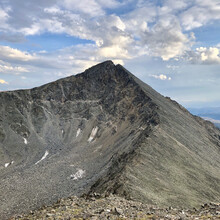 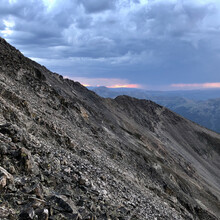 In the spring of 2020 my good friend, Erik Sanders, having already solidified himself in FKT history with the Rainer Infinity Loop and Cascades Trifecta (shameless plug), informed me of the FKT website. I quickly came across the Mosquito-Tenmile Traverse (MTT), envisaged by Peter Bakwin, and was immediately entranced by its sustained altitude and logicality. On a run with Erik and Sevve Stember (who would later drop me at Weston pass for my first MTT attempt) I proclaimed my intent and propositioned them to join me. While the proposition was ineffective, it did give me a sense of accountability.

After skimming a few trip reports and running some numbers based on my other alpine outings, I thought “Okay, I think I can do this in less than 20 hours.” I was lost in delusions of rolling alpine meadows separated by a few 3rd class ridgelines, and would certainly be made a fool. With Sevve graciously agreeing to play taxi, we dropped my car at the finish in Frisco and headed up to Weston Pass. On Saturday, July 11, 2020 at 2:32 AM I blazed up the steep, grassy face to Weston Peak. I was in solo unsupported style and had a typical alpine running kit with the exception of an entire gallon of water. I intended to filter more at Pacific Tarn, between Atlantic and Pacific peaks. Fun fact, it’s the highest lake in the US recognized by the United States Board of Geographic Names. Through the night the Moon’s illumination allowed me to forgo a headlamp, and there was an unfamiliar large, red, conical hue in the northeast sky. I wasn’t hallucinating; it was Comet NEOWISE. Fast-forward 14 hours: I sat atop the ridgeline past Wheeler and scanned the seemingly endless gendarmes ahead of me while considering dehydration, empty water bottles, and waning daylight. Physically ready for more but logistically unprepared, I knew I had to bail. The route was far more technically sustained than anticipated, and consequently my pace much slower.

I learned a lot from that attempt. Most importantly, I needed to start earlier. The additional hours of darkness at the beginning would help conserve water and daylight for the most technical sections. Also, I needed gators. Spent way too much time digging rocks out of my shoes. Later that season I would scout the ridgeline from Wheeler to Fletcher. I also wanted to scout the 3rd class terrain from Peak 4 to 2, since I would be navigating it by headlamp in depleted mental and physical form. Having done the Tenmile traverse in 2018 though, I let it slide. I would pay for that.

My wife, Alex Skogen, loving and supportive as always of my mountain shenanigans, agreed to play taxi on my second attempt. On Friday, August 13, 2021 at 10:35 PM I started up the steep, grassy face to Weston Peak once again. As I turned around to watch Alex’s taillights fade away I thought “Well, I guess this is happening” and continued into the darkness. The vibe was different this time; the moon had set and my visibility was limited to the illumination of my headlamp. This limited visibility also gave me the joyous surprise of passing within 20 feet of mountain goats while ascending Sherman. I laughed to myself, imagining their confusion: “Why is this human passing through our home and disturbing our slumber?”

Based on my previous pace I would summit Tweto at sunrise and have daylight for the first sustained 3rd class ridge traverse. Sunrise came prior as I was clocking 1:15 behind my previous attempt. Admittedly, I had been training more in the alpine that year and was also ignorant to the difficulties that lay ahead. This year I was having left heel pain and decided it better to be undertrained than injured. Things were proceeding smoothly as I summited Democrat and was greeted by the crowd of people cracking beers and posting to their social media accounts. It was a welcomed change in intensity. I took in the incredible views, stared down the terrain to come, and enjoyed my first proper refueling. Following a miniature pecan pie, three electrolyte chewables, and a piece of MEG (if you know, you know) I stormed down the next technical ridgeline.

I was feeling confident as I passed my previous bail point at the beginning of the ridgeline extending north from Wheeler. As expected, the two mile traverse across the ridgeline to Drift felt like an eternity. Next was the notch between Drift and Fletcher that defined the technical crux of the route. Albeit short-lived, the 5th class rightward traverse becomes increasingly exposed with every step. Mantling through the final movement, I breathed a sigh of relief and spoke a few words of self-affirmation. Just before ascending Fletcher I heard the trickle of water coming from a snow patch below me. Far more accessible than Pacific Tarn, I capitalized on the opportunity. Although I had not done the section from Fletcher to Atlantic, I knew I was going to drop down to the east and skirt under the couloirs. It went quicker and smoother than anticipated. I relished the fact that the terrain would ease, but my physical fatigue was beginning to test my mental fortitude. The verbal self-affirmations were becoming more frequent: “You can do this”, “One foot in front of the other”. I thought of my old man surviving five winter nights in a plane wreck on Denali. I had it easy.

Despite their intimidating magnitudes, Pacific and Crystal passed quicker than expected and helped boost morale. An intensifying lightning storm to the east triggered a shot of adrenaline that took me up Peak 10 and down its bastardized talus field. By that point, darkness had fallen, making the decent feel particularly long and tedious. In the saddle between Peaks 9 and 10, I decided to give my wife one last call before bed and let her know I was entering the final push. Time to go offline. Then the mountains reminded me I was still at their mercy, with strong winds and cold rain as I pressed on up Peak 9. I peered at the downtown lights of Breckenridge and smirked at the stark contrast: cozy pubs, comradery, libations. Meanwhile, a lone man was five miles away traversing an alpine ridge through the rain, wind, and darkness. The masochist in me felt a small sense of pride.

Peak 9…8…7…6…5…4...they went smoothly enough; the ground was soft. Then things got interesting again from Peak 4 to 2. As a climber, I referred to this section as the redpoint crux: particularly difficult due to the terrain that preceded it, and in my case, the darkness that enveloped it. It was time to pay for not revisiting this section. I had extensive route finding issues and always seemed to choose the wrong way first. Every dead end took its mental and physical toll. It started to feel like I would never get off the mountain. My water had been gone for hours. If I closed my eyes I would surely fall asleep. 1:00am…2:00am…3:00am. Salvation was so damn close, I just needed to keep my shit together and keep moving.

Peak 2…finally. The route finding and exposure were over. I just had to link the saddle to Peak 1 and descend into Frisco. The 3,700 vertical feet of descending were the slowest and most painful miles of my life. I had to pause and focus before stepping over downed trees. Near the trailhead I passed a couple of early morning groups going up. Maybe a Peak 1 lap, maybe Tenmile Traverse? Either way, oblivious to what the unassuming man they just passed had been through. 31 hours and 10 minutes after leaving Weston Pass, I stepped onto pavement in Frisco.

Why? Why put one’s self through something like this? I love the solitude, freedom, and awe-inspiring magnitude of the mountains. But those can be experienced for much less. I wanted to explore my limits. I wanted to move until I was ready to collapse. Maybe until I did collapse. And then I wanted to drag myself up and keep moving. Rinse and repeat. I found what I was looking for. Perhaps more. Now I know.