The Mosquito and Tenmile Ranges are a single high ridge of mountains in central Colorado. These two ranges are divided by where the Continental Divide crosses the ridge - in the area of Clinton and McNamee Peaks.

The Mosquito-Tenmile Traverse (MTT) was first envisioned by Peter Bakwin, who was struck by the sustained high elevation of these ranges in the area between Weston Pass and Frisco. From Weston Peak to Peak 10 is roughly 27 miles along which the ridge crest never dips below 13,000 feet. North of Peak 10 the ridge does drop below 13K, but the peaks remain high, in the high 12,000s all the way to Peak 1. This has to be the longest, highest ridge in the US outside of Alaska. While the Mosquitos extend all the way south to Trout Creek Pass, the southern part is lower with only 2 peaks over 13K (E & W Buffalo Peaks).

From Weston Pass to Frisco is about 38 miles with very roughly 17,000 feet of ascending and 20,000 feet of descending. There are 34 named peaks, points and significant unnamed summits from Weston Peak to Peak 1 (see below). There are two 14ers (Sherman & Democrat), twenty-four 13ers and eight 12ers (Peaks 1-8). The 4WD Mosquito Pass Road is the only road of any kind that crosses this section of the range, and the route is almost entirely trail-less though one can find short sections of old road and a few "use" trails, and there is a trail ascending Sherman from the Sherman - Sheridan saddle. While much of the traverse is "easy" class 2 terrian, there are extended sections of rock hopping and class 3 scrambling, and some 4th and 5th class sections. Constant route-finding is needed to locate the best route.

Bakwin attempted the full traverse (Weston Pass to Frisco) on July 23-24, 2010, but only made it to Fletcher Mtn, about two-thirds of the way. His report on the trip is entitled "Knowing When To Quit". The following year, July 2011, Bakwin gave it another go, but was became bogged down after getting forced of the best line between Fletcher and Atlantic peaks by an unusually large snow-pack. He reached Peak 10, thus completing the section of ridge that is sustained above 13,000', but did not go all the way to Frisco. His report on the second trip is here. 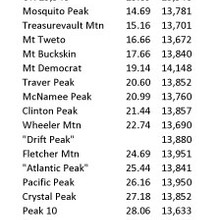 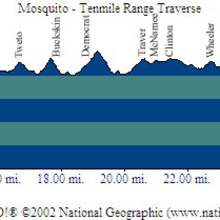