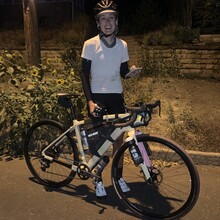 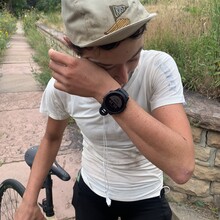 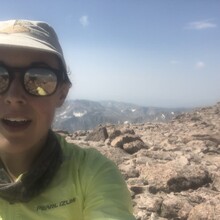 Psyched to get this done! Been thinking about it all summer, and trying to work up to it. After our ride to Evan's last weekend (a 15k' day on the bike!), and crawling up Longs on the tail end of giardia a few days before that, I felt confident going into the Duathlon–rested and fully recovered.

Left the house at 5:49 with two full 20oz bottles on the fork and two full 26oz bottles on the frame—no water at the TH this season. Was probably rolling from the Bustop just after 6. Could tell from the get go that the legs were feeling good. I guess when the skinniest tires you ever run are 38mm GKs, a 35/32 roadslick set-up feels pretty fast! Headwind to Lyons, but hit the traffic light at 33:55. Was glad I decided to wear armwarmers and gloves—pretty chilly all the way up to Allenspark (2:35). Rolled up to the bike racks about 3:02/3:03. Had to hit the bathroom but all said and done a 9min transition and I was running by 3:11.

Took it pretty easy on the way up—of course I botched MLW (in the other direction this time) which was frustrating but oh well. Sort of a death march across the boulderfield and up the talus, and very windy up high today! The cables were wet/icy so I took my time there too. Reached the summit in 2:34 from the TH, 5:45 moving time for the day.

After negotiating the cables on the way down, I felt much better going back across the boulderfield and *finally* nailed the MLW-Jim's Groves section. It had started drizzling a bit at this point, which felt great, but did result in a few spills on wet rocks on the way down. Dipped a flask in the creek right before the TH, chugged half, refilled, and was back at the bike at 7:21/7:22, making for a 1:36 descent.

7min transition to get rolling again and was glad that a) it felt great to be back on the bike, and b) the rain was stopping—definitely didn't want to hammer down SSV on wet roads!

Went as hard as I could on the way back—8:40 moving time to the Lyons corner—then left all that I had on the road between Lyons and Nobo. Really thought I might squeak in at 9:15, but alas I'm very pleased with 9:17:14 as my round trip time!

Thanks to Kate Hale for really getting after it on Longs for the last couple of years, and for setting a goal post to aim for on the Duathlon!