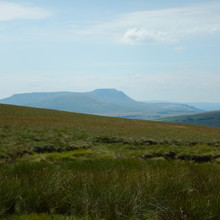 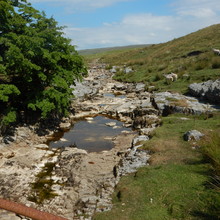 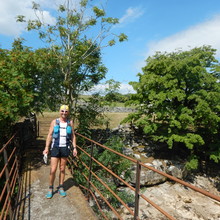 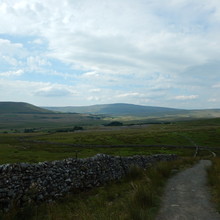 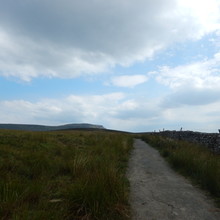 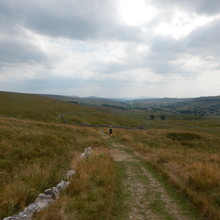 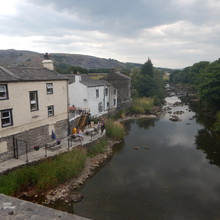 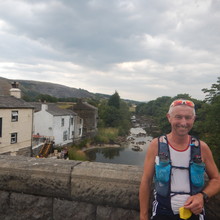 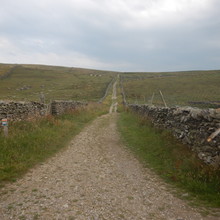 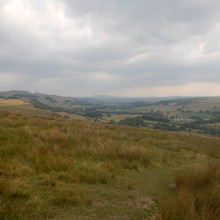 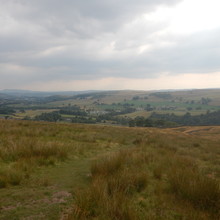 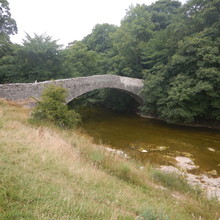 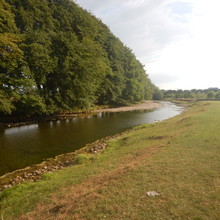 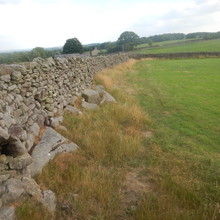 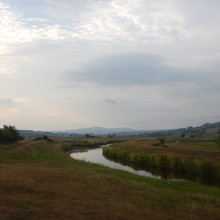 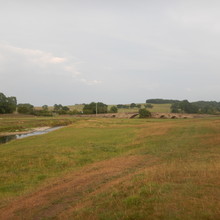 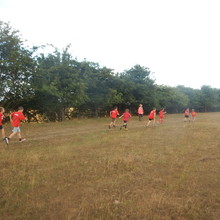 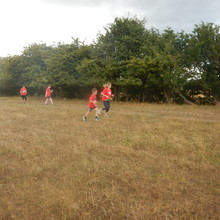 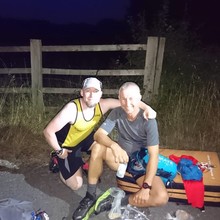 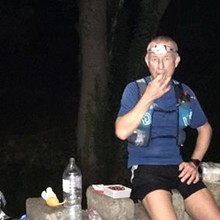 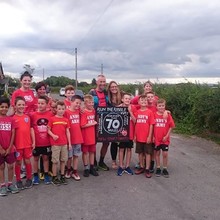 Starting at Cam Fell above Newby Pass the North to South route follows the Ribble Way from its source to the Dolphin Pub on the marsh by the River Douglas.
Jonathon and I got a lift up to Newby Head late on Friday morning and set off to walk up to the start of the Ribble, a couple of miles up the fell. The "source" is a tiny spring just to the right of Jonathon in pic 1. The weather was brilliant and the views over Ingleborough and the fells were magnificent. At 12.45 we set off at a gentle lope down the fell. As we dropped down off the fell, little dry valleys joined each other and soon the Ribble formed, although there was hardly a drop of water in it. Just before Ribblehead we crossed Blea Moor Rd at Gearstones and headed down through the rolling valleys trying to meet up with the traditional 3 Peaks route back to Pen Y Gent. Here my navigation failed as the route disappeared and we ended up with a mile detour through completely unrunable scrub, stream beds and steep sided dry valleys.
We eventually found the track again and started to make good progress towards Horton although any time we dropped out of the breeze, a wall of heat just hit us. We had a beautiful run down old green lanes into Horton where we filled up with more water.
From Horton we actually ran beside the river to Helworth Bridge before heading back up the fellside to Studfold High Pasture. The views over the valley were breathtaking and for the first time we could see right down the Ribble Valley to Pendle on the far horizon. The run down into Stainforth was on lovely springy, old turn and we arrived feeling full of beans. Here I said goodbye to Jonathon and after a quick bite to eat and filling lots of water bottles, I set off again over the old bridge towards Settle. 18 miles done and some nice runable sections beside the river. Settle came and went and soon the route was passing through rolling Rathmell. I got a bit lost as the route had been moved but, once back on course, I was met by Neil Critchley who had finished work and dived in the car with Susan to come and help.
The route then took us through rolling farmland down towards Paythorne. Navigation was ok- we just ran with the map in hand and enjoyed the hares and buzzards we met along the way. Paythorne marked 30 miles into the route and I was about an hour up on time. Here Neil left and I met my parents with a dry shirt, more food, more water and my headtorches.

After a quick 10 minute stop it was off into the dusky woods around Gisburn. The route is anything but flat around here and as darkness fell I was on some glorious forest tracks running by headtorch. Once out of the forest and back into the farmland navigation was again an issue, constantly being on the look out for styles hidden in overgrown hedgerows and obscure routes through dense valleys. After wasting 20 minutes going up an down farm tracks and through a farmyard looking for the route out, I eventually found the path and after crossing a couple more fields I could see a light in the distance by some buildings. As I got closer I was delighted to meet Alex rather than a farmer with his shot gun. Never have have the words "How are you doing?" followed by "Give me your map and follow me" been so welcome!
Off we set again into the darkness. Even with Alex's fresh eyes navigation issues slowed us down as we struggled with blocked paths and changes to the mapped route. As we neared Sawley we ran into the remains of last week's Beat Herder Festival. It's a strange thing running through a deserted festival site in the dark so we grabbed a quick photo and then scooted off down to Sawley. As we got there the heavens opened and all the rain we have missed in the last month or so tipped down on us in half an hour. It was still quite warm so we ran on and ran ourselves dry across fields and farms to West Bradford. Here Joan had left us a supply bag outside her house so we ate flapjack and drank milkshake sat on a wall as folk passed us on the way back from the pub. We must have looked some sight!
It took a bit to get the legs going again here but after a quick yoga-by-moonlight session off we trotted down through the miles of Clitheroe Sculpture Park and off down towards Ribchester. Again much of this part of the route took a bit of navigation. There is hardly any "path" to follow and I was starting to suffer a bit. I'd covered 50 odd miles and been on my feet for over 12 hours and it was starting to take its toll. In the low points it was brilliant to have Alex saying "Just follow my heals" as sometimes this was about all I could manage.
Any case the low points passed and as we trotted onto Ribchester Bridge it was great to see Amy and Joel there with more food, water and buckets full of encouragement. It was like the good cop-bad cop of ultra running support. Laid back Joel with "Hey man, have a crash mat to sit on" and Ultra-Amy organising me with "You will eat this. You will drink this. Choose some of this food- You will take it with you." I've never seen her this bossy before but it was just what I needed.
Fed and watered we all went our different ways again, Alex back to his family and Joel and Amy back to their tent.
I don't know if it was tiredness or confusion or just being by myself but this was the start of a very low point. I was sick of going up and down all the little valleys I had to cross, sick of searching for hidden styles and paths that had been moved. I was sore, tired, my brain didn't work and I was fed up.I had covered about 60 miles in 16 hours and I really wanted it to be over. Luckily I could just hear the M6. That meant Preston so that meant easy miles down the river and each step would get me closer to the end. Head down, plod on, one foot in front of another.
Then it started to get light and I stared to cheer up. That was just before I got to the "Footpath Closed sign. "Do not pass go, do not collect £200, have a two mile detour". It was a bit of a blow but I was close enough to the M6 bridge to think that I could make it and I really didn't want to let anyone down. My legs wouldn't run at this point so I had a rest by walking down through Brockholes and then trying to run / walk sections. At least it was light, but I was very tired. I was worried about going lightheaded after each run section, my legs were wobbly and I was finding it hard to recover at all. That's when the white ferret started to run behind me but when I turned around it disappeared. "You aren't really there are you?" That woke me up and for the next ten minutes I walked, ate and drank as much as I could. When I was feeling sorry for myself I hadn't been eating or drinking!
Some strength came back into my legs and the fog cleared from my head. By London Road bridge I started to run on again. Easy miles now and people waiting for me at the finish. Keep going, keep moving forwards, even if it's only slow.
Down through Avenham Park was quite beautiful and starting to get busy with people running to their Parkrun. Massive pressure now as I can't look phoney by walking with my ultra vest on whilst they run. That get's me fired up and going again and after, a quick water stop at the bridge, I'm over onto the Penwortham side. The home straight!

Running down the river I get quite emotional passing the church where Andy's funeral was held but I know that, somewhere down here, Joseph and Andy's army are waiting. Well I heard them about a mile before I could see them!

20 excited 9 year old lads make a good amount of noise on a Saturday morning even with Sue and some keen mums to keep them all in check. High fives all around and then we are off for the last 4 miles down the river bank to the Dolphin. They were so excited and so full of beans it was great to see.
Along the last bit of road to the pub the boys were under strict instruction from the grown ups to "Stay behind Iain" and "All run in together"

"We run ten yards and when I shout "Go" we race in" I whispered to them. So we raced in and Joesph beat me!
Andy was always a free spirit who usually did things his own way. He'd have liked that.