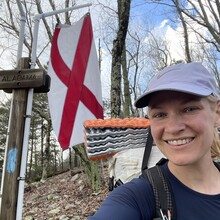 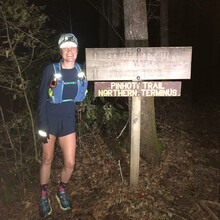 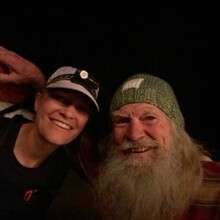 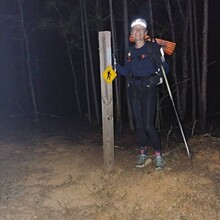 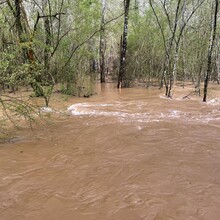 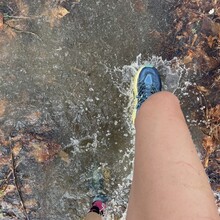 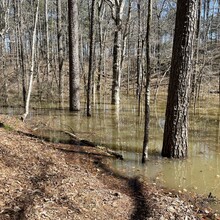 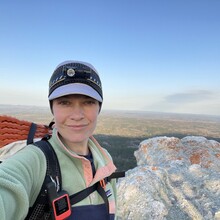 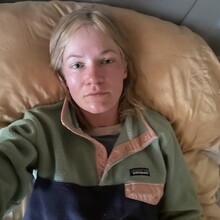 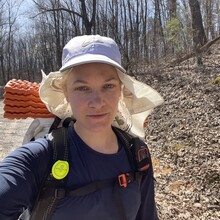 Here are the daily updates I posted via Instagram:

Some notes:
-I saw a big wild turkey which seemed like a good omen (Pinhoti is Creek Indian for “turkey home”)
-I crossed many creeks and had very wet feet but didn’t get any blisters thanks to some preemptive taping (thx KT for the tip!)
-In fact I didn’t chafe anywhere at all which has been a giant problem for me with longer distances!
-I ran most of today which was the plan. I was incentivized to finish somewhere with a hotel and hot food (I also stashed most of my stuff in a hotel ahead of time so I could travel light for one day)! I probably won’t run much at all the rest of the time but hope to maintain a steady hike and see how far that takes me every day. From now on it’s more hours, fewer miles per day.
-Also I didn’t cry once
-Also that was hard

To be continued. That is if I have cell service and any energy at all. :)

Thanks @onewomandanceparty @runofthemill87 for driving me and hiking in with me in the wee hours of the morning to the northern terminus and taking my starting pic!

First day with a full pack!? While yesterday was wet with creek crossings, today’s section was dry as a bone. I ran out of water once or twice, got a nosebleed, my throat is constantly dry, and when I put my headlamp on at night I thought a bunch of bugs were flying at me but it was just all the dust in the air.

I was skeptical I could reach today’s goal and I started bargaining with myself with how I could do less today but make it up tomorrow because all I wanted to do was stop once I reached 40 miles. I basically tricked myself into keeping going, “just a little further”.

One of my fears going into this hike has been loose unfriendly dogs chasing me on the road walk sections. Today I met two of the friendliest pups. It’s like they knew!

Tomorrow’s goal is less demanding on paper than the first two days, but of course those first two days are catching up with me so we shall see how it plays out! ~Mercury

The thing about setting up camp in a quiet valley with dry leaves everywhere is that you can hear every little thing. I woke up a few times to hear something creeping toward or around my tent- probably just a mouse, but just in case I shouted at it in my scariest voice HEY! GO AWAY!! Every time I zipped open my tent and shone my flashlight around there was nothing. Like I said, probably a mouse. :)

On paper, as I said, it was not a hard day in terms of miles and elevation compared to the first two days, and I was happy to simply walk without having to watch every step in the road section. The challenge I wasn’t as prepared for was going long ways without access to water and lots of sun exposure. Collecting water in the forest is easy as the trail often goes right over streams and creeks; in this section there was a bit more going out of the way, whether climbing down an embankment to a stream, or buying juice at a gas station. At one point I knocked on someone’s door and begged for water and a kind old man helped me out and gave me an icy cold bottle of water.

I made my goal of reaching Cave Spring where I’ll spend the night at the Hearn Inn- good timing because a big storm front is coming through tonight so I’m glad to have somewhere warm and dry to sleep.

Tomorrow was planned to be an ambitious day, but with the storms going through the early morning, I’m opting for a later start (7-8am vs 4am), which probably means fewer miles. This throws off my plan for the rest of the trip so from here on out I’m pretty much improvising. That’s what it’s all about right??

The great flood!!! Got a later start today, 7:30am or so. I avoided the storms (hence the late start) but did not miss out on the massive flooding that occurred on the trail!

I felt great today and in good spirits. I made it to Alabama and past the halfway point. So far the trails in Alabama have been beautiful and a NOBO hiker I met today said it just keeps getting better.

I am currently 6.1 miles ahead of where the overall self-supported FKT holder (Willie Thacker) ended his fourth day. To get the overall self-supported FKT, I have to complete the remaining 151.3 miles in three days, before 10pm on day 7 (Saturday). It will be a tall order but I’m setting my alarm early tomorrow and giving myself a chance. ~Mercury

I’m glad I got that early start, because today had the unexpected hurdle of the trail being totally underwater by some flooded lakes. This made for some harrowing bushwhacking up and down some steep embankments and ducking over and under thorny vines. I also had to cross a deep pool which was so scary as I’m not a fan of deep water. Ooof! Outside of that this was a great day. :) Some beautiful pine trees and soft pine needles to walk on which make my feet happy. I’m currently five miles ahead of where Willie ended day 5. The next two or so days are going to be tough. Time to sleep!

Today I hiked through the Cheaha Wilderness, up and over Hernandez Peak (the highest point of the Alabama section of Pinhoti), and through the infamous mega rock garden south of Clairmont Gap.

Most of the day went swimmingly, though my pace slowed as I made my way through some more difficult terrain, plus my right shin has started to get very puffy from the wear and tear. I had hoped to keep my lead on Willie’s overall self-supported FKT, but called it a day just around the same place he did on his sixth day.

With 63.7 miles to go, and my shin feeling bad, I’m not confident I can finish in time for an overall FKT. However, I’m still in the running to break Katherine Baird’s women’s self-supported FKT.

I don’t see a big heroic finish happening, but I will do what I can to keep moving forward and taking care of myself.

Wow, things took a major turn last night. As I got ready to sleep in my tent, everything started to hurt. My joints, tendons, everything. I knew if I wanted to keep feeling good I had to eat and drink. I tried to eat a bagel but only managed a quarter of it. I kept drinking water but that just seemed to make things worse. I took ibuprofen for the pain but that made my stomach reel. It was a rough, largely sleepless night. It was also very cold and damp in my tent as I was by a creek. By the time I finished getting ready in the morning (around 2:30am), I was shivering and got back in my sleeping bag to warm back up and rest a little longer before I packed down my tent. Once I got going on the trail my stomach continued to churn. I hoped it would settle down but I ended up having to “go” a couple times.

I thought about the day ahead and had no idea how I could plan to walk all day if I wasn’t able to eat. I checked guthook and saw the next road crossing was a shuttle stop for Next Step Hostel. It was early, 5:50am, but I gave it a shot and texted them. They wrote me back that they were out of town, but to check with Pinhoti Outdoor Center. I called POC and miraculously someone (Nathan) answered. I told them where I was and they sent one of their shuttle drivers, Laurie, to pick me up.

I spent the rest of the day at the hostel drifting in and out of sleep, shivering and bundled up until the afternoon and still unable to eat anything until 6:30pm (pizza and sprite).

I have “only” 58 miles left but time is running out before my flight home Monday. I am still on track for the women’s self-supported FKT. After a day of recovery and a night of sleep ahead, I am feeling better (better than what you see in this photo!) and hope to get back on the trail early tomorrow.

Day 8 - Back on the trail! I’m able to eat again, my stomach feels better, and my body feels strong after a full day and night of rest. 58 miles to the southern terminus, Flagg Mountain. Let’s hike:)

Today I was focused. I walked, hardly stopping at all, from 3:41am to 12:12am. I was treated to a sunrise over a long, beautiful ridge line with views to either side. The mountains were gentler than up at Cheaha, tapering off just as they look on a map, the tail end of the Appalachian range.

Practically nothing broke my trance the entire day. There was no drama, no bad weather, no scary obstacles- well, except I had heard the trail 6 miles from the terminus had been obliterated due to logging, but I’d deal with it when I got there.

After the ridge walking came a long road walk in the sun. I resorted to kindly begging for water from a man washing his car in his driveway. Later the trail/road went right by a dollar general where I treated myself to an ice cream sandwich, another water refill, and getting to use a real bathroom and wash my hands in running water like some kind of queen!

Back on the remaining 17 miles of trail I met some cheery thru-hikers on the first day of their journey. My feet and shins started to speak to me. As the sun went down I said farewell to the last daylight I’d see on the Pinhoti Trail for this trek.

I entered the obliterated section that looked as if a monster churned up the entire forest (Ferngully flashback!). Logs and branches everywhere. I used my gps app to stay on course. After getting through that part I felt as if I had defeated the final Pinhoti boss between me and terminus.

The rest of the trail was a rollercoaster, up and down, up and down. Twinkling strung up lights came into view as I approached the famous Nimblewill Nomad’s cabin on Flagg Mountain. He came out to congratulate me and told me just a mile to go. I continued on up to the watch tower then down the winding trail to the terminus. I made a bunch of wrong turns in my tired state, all of which I went back and corrected, until finally reaching the humble wooden post marking the first blue blaze of the trail. It didn’t seem real. I made it! Kimm from @pinhotioutdoorcenter greeted me with soup, hot tea, and a blanket and whisked me away back to the hostel to sleep.✨

What an adventure!! I'll likely post some more thoughts/reflections in the next week or so on my blog at mercuryontherun.com.