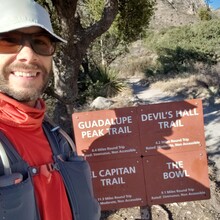 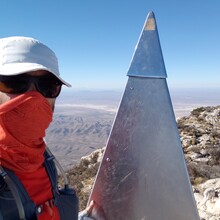 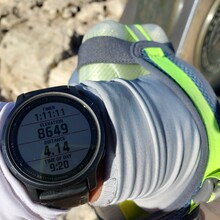 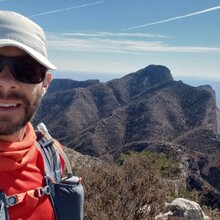 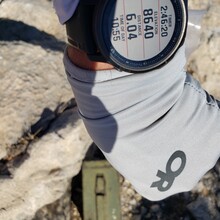 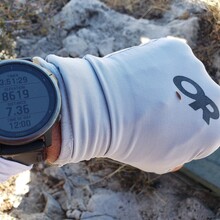 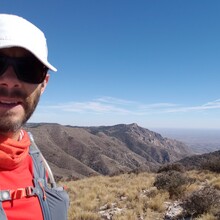 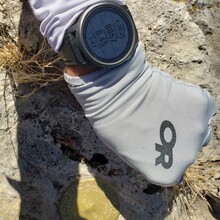 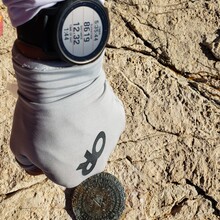 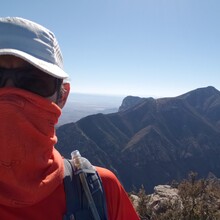 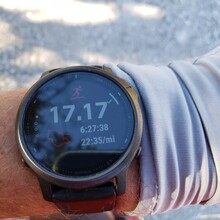 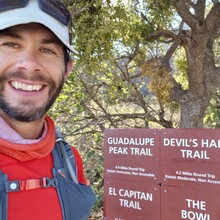 Trailhead 0.0 miles, 0:00:00 - My training plan had me scheduled for an 18 mile long run today with some uptempo in the middle. I thought this would be a good opportunity to run the 4 Highest Peaks in TX (located in Guadalupe Mountains National Park) since it would be about that distance and an FKT attempt would count as "uptempo" effort. The standing unsupported FKT was 7:58:59 set two weeks ago. Although about 4.5 miles and 2750+ ft of elevation gain were going to be off-trail, I thought I could take a few hours off the existing time.

Shumard Peak 6.04 miles, 2:45:47 - I tried not to waste any time searching for the "best line" and just started heading down off Guadalupe and along the ridge line. I had to downclimb a small cliff just off of the peak, and most of the rest the descent was relatively steep and loose. I'm surprised by how slow this is going. I stepped on a cactus and got a needle through the side of my shoe on the way up Shumard that took about 10 minutes to extract. I was able to move a little faster as I got close to the top of Shumard, but after averaging ~50 minutes/mile for this section I knew the day was going to be much longer than I had planned.

Bartlett Peak 7.37 miles, 3:51:04 - Trying to stick the ridgeline, I eventually ran into pretty steep terrain and rock close to the top of Bartlett that required hands and feet for a few hundred feet. I did get a stuck at one point and have to turn and go another way. I'd probably go around these cliffs if I had to do it again--or at least pick a better route up.

Bush Mountain 8.47 miles, 4:40:02 - I had read that the section from Barlett to Bush wasn't bad, but I disagree. The descent off Barlett had the thickest brush and was the slowest moving of all the off-trail stuff, I got another cactus spine--this one stuck in my ankle--requiring me to stop and take off my gaiters, calf sleeves, and socks to remove the needle from my ankle. The climb up Bush wasn't too bad as there was a bit of a wildlife trail and the last 0.4 miles was back on trail (finally). Overall from Guadalupe Peak to Bush Mountain took me 3.5 hours to go 4.4 miles. I had a lot of time to make up on the trail to Hunter and then back to the trailhead!

Hunter Peak 12.33 miles, 5:36:00 - The trail down Bush wasn't too bad. It's not nearly as nice as the more well-used trails in the park (e.g., Guadalupe Peak, Tejas) with lots of loose rocks and is overgrown in areas. I tried to move as fast as I could but there was more climbing than you might expect as the trail sticks to the ridge. The trail up Hunter was in good condition.

Trailhead 17.17 miles, 6:27:38 - After snapping a photo of the benchmark and Guadalupe Peak from the top of Hunter, I was off for the final 4.9 mile descent back to the trailhead. I figured I could come in under 6:30:00 if I could average 10-11 minute miles. Most of the trail was pretty nice on the way down, but there are some areas of the switch backs that are pretty steep and loose requiring me to slow down a bit. Unfortunately I somehow got another cactus spine, this one through the bottom of my shoe, so I had to stop and remove my shoe again to get the spine out. After that, I was able to cruise the rest of the way back tot the trailhead pretty quickly.

To sum it up, I would not recommend this route. It is much harder and slower than I expected primarily due to the off-trail "bushwhacking" from Guadalupe to Bush. It took significantly longer than I anticipated, which led to other problems like running out of water and calories (I carried 72 fl oz of water--4x 18 oz bottles--and 1300 kcal of Spring Energy gels, Unived gels, and Clif Bloks). I wore calf sleeves and running gaiters--which protected my lower legs--but my knees and quads were very cut up, plus I ended up having to stop to remove embedded cactus needles on three occasions (it's often hard to see the low lying cacti through the thick brush). A person could definitely cut some time on the on-trail portions I don't know how much faster someone can move through the off-trail portions--it's just slow and miserable. I can definitively say that once was enough and I will not be doing this route again.