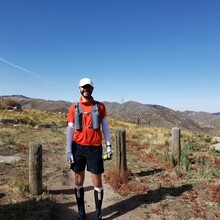 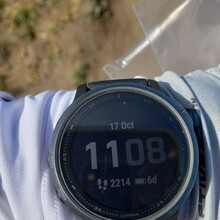 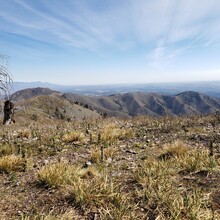 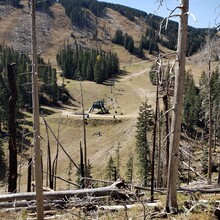 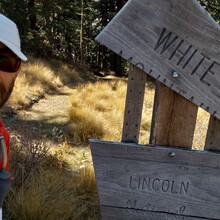 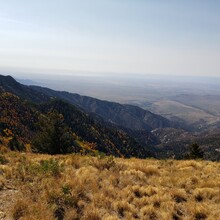 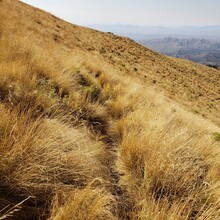 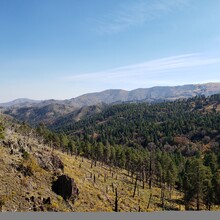 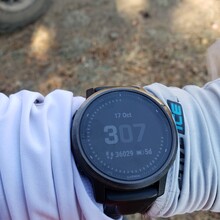 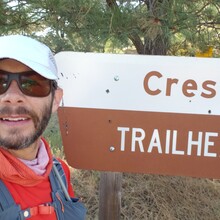 My original plan when I mapped out the year was to do my first road marathon this month, but after that race was cancelled back in July, I took some time off of running before choosing a new goal to train for. I'm 7 weeks into that training block (for a bigger project planned for December), but I thought it was a good time to take stock of my progress and test myself with this FKT on the Crest Trail (T25) in New Mexico.

The standing unsupported FKT, set a month ago, was 4h 57m 54s. I set out with a goal of going under 4 hours, and finished within seconds of my pacing strategy--proof that my planning works! My attempt was unsupported, which I think is the best way to do this trail. There's only one place around 4.75 miles where a crew could easily access the trail/you could easily stash water, otherwise all trail intersections are many miles from any trailhead. And the trail is just about the perfect length for being able to carry all the water you need--since there were no viable water sources along the way (at least at this time of year). I carried 3x 18 oz bottles in my vest, plus another 18 oz handheld for a total of 72 fl oz of water, which was the perfect amount. I had 4 tailwinds (one in each bottle = 800 kcal) plus one Spring Energy gel (150 kcal) for a total of 950 kcal and 2624 mg sodium during the run. Since I was only out there for about 4 hours, I probably didn't need the gel (and it didn't really sit very well in my stomach).

I started about an hour later than I thought I would considering I only slept for about 4 hours after driving up from Texas after work on Friday night. It was already 64 degrees F when I started (it was 69 when I finished), but with the wind it never felt too hot. The wind did, however, slow me down a bit as it was blowing pretty strong from the northwest, and I was running the trail from south to north--right into the wind. Gusts also about blew me off the side of the mountain a couple times.

I'm glad I made the trip up to Ruidoso to scout out the trail two weeks ago as it saved me a lot of time checking the map (even though it is actually pretty well marked at all the trail intersections) and I knew exactly what to expect from the trail. Overall, I like the trail but it's not the fastest course. There are a lot of blowdowns across the trail from the 2012 fire from close to the beginning to the top of the big climb at mile 7--many of these slowed me down quite a bit having to go way around, crawl on my hands and knees under, or climb over. Following that there were extensive sections where the grass is so tall and overgrown that you can't see the trail beneath your feet. This also significantly slowed me down as I kept tripping on rocks or clumps of grass that I couldn't see, causing me to run slower and more careful than otherwise on what could have been fast downhill sections. Since I'm in the middle of a training block and not really peaking at the moment, my climbing legs were already shot by mile 12-13. Plus I tweeked my right leg (not really sure what I did) during my workout on Tuesday and it's still bothering me. From the half marathon mark to the end has a nearly equal amount of ascending and descending, so I was losing quite a bit of time on the uphills and trying to make up the lost time on the downhills. Some of this was probably also the elevation (elevation ranged from about 8800 to 11200 ft) since I live and train at 3000 feet and had no time to acclimate.

There were quite a few people out on the trail, and I guess hunting season must have started--I saw about a dozen hikers and equal number of hunters. Unfortunately I didn't see any notable wildlife. In the end, despite feeling pretty worn out toward the end, I'm happy with my time and this was a fun trail to run--and good place for me to test my current fitness in the mountains.