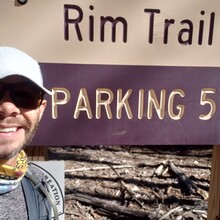 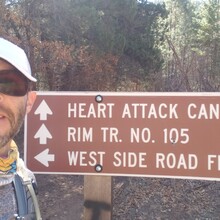 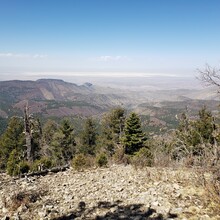 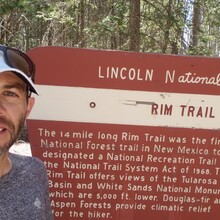 I've been wanting to check out some of the trails in the Sacramento Mountains for a long time so when I was in El Paso for the weekend, it was a good chance to drive up for the day. I saw this route listed on the FKT website so thought it would be a nice way to explore some of the trails, get some elevation, and get a good training stimulus. I was tired when I started as I only got a few hours of poor sleep the night before between driving to El Paso and then getting up early to drive to Cloudcroft, but nonetheless started the run at a pretty good pace down the Alamo Peak Rd and Alamo Peak Trail. I slowed down a bit on FR-90 but was still making decent time. I had heard about Heart Attack Canyon being pretty rutted out and a difficult climb but actually the first half or so wasn't as bad as I expected. The second half, however, was just as steep, rutted, and unpleasant as I had imagined. Once getting to the top, I thought I'd be able to make up some of the time I lost in the Canyon. Unfortunately, I wasn't really prepared for the thin air at 9500 ft so the rest of my run was relatively slow paced but still enjoyable. There was a good amount of snow and mud lingering at the upper elevations that slowed me down a bit as well in some spots. I should also note that being unfamiliar with the trails, roads, and forks, I did take a few wrong turns having to stop and double back. Thank goodness for GPX files and mapping on my watch to keep me on the right path. There were some nice views of White Sands along the route, a herd of about 8 elk on the Rim Trail, and overall nice trails. I also didn't see a single person all day. In the end, I'm not sure I'd care to go up Heart Attack Canyon again, but did enjoy the Alamo Peak Trail and Rim Trail sections and hope to be back to explore more trails in the area soon.

This run was unsupported and I carried 2 x 18 oz bottles and 580 kcal of Tailwind and Clif Bloks.