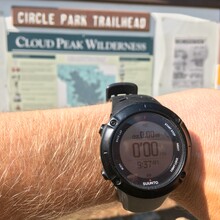 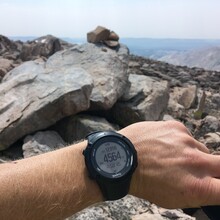 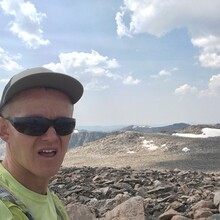 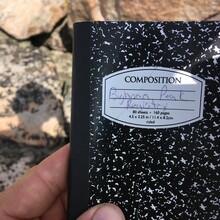 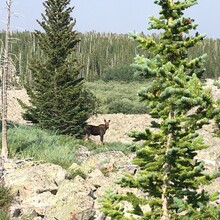 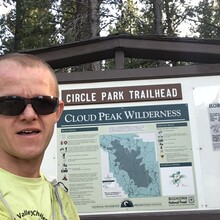 On July 25, 2021 I set out to summit Bighorn Peak. If I’d known it would be this hard I might not have tried it. At the very least I would have started earlier.

Looking at a map of the Bighorn Range for peaks to climb I came across Bighorn Peak. I figured it must be rather prominent to share a name with the range. I started doing research on it but couldn’t find much info, other than a Summitpost page. There was a brief route description, but not much else. I couldn’t find any gps files from other people or even times for the ascent or roundtrip. The few trip reports I found indicated that most take at least a full day for the roundtrip, if not an overnight.

I started from the Circle Park Trailhead, what appears to be the standard route, at 9:37am (not early enough). I had made a gps track of what seemed to be close to the route as described. It said it would be around 7.8 one way but I was sure it would end up being more than that. I did my best to follow it, looking unsuccessfully for animal trails. It eventually turned into hours of tedious scrambling and jumping from boulder to boulder, trying not to step on ones that were loose. I went up the central ridge, around a few patches of melting snow that I filtered water from, almost turning back a number of times.

On the way down I dropped to the south side of the central ridge to avoid some of the giant boulders. I took a similar descent line off the ridge and found a slightly easier route north of where I came in, where I saw a moose. Altogether I conservatively had 6 or 7 miles of mentally exhausting 45 min/mile boulder hopping and scrambling. I got back to the trailhead at 6:36pm with 18.69 miles. You may be able to get the roundtrip distance down to 18 miles but it likely doesn’t make sense to cut off any more mileage than that. 8:59:12 may not seem like a fast time but it’s probably much better than you think. My ascent time was 4:58:45. I’m reasonably sure no one has gone faster than this. I looked around on Strava trail segments that lead to the route-finding portion and didn’t find any faster times. I ran by myself, unsupported. I saw several hikers in the first 5 miles or so, but no one once I started scrambling. I consumed 600 calories (not enough as I very much underestimated this mountain) and consumed probably 3 liters of water. It was amazing to be on such a remote and beautiful mountain but it would be very easy to step on a loose boulder and injure yourself. Please be careful.