Bighorn Peak is a prominent peak in the Bighorn Mountains in northern Wyoming. It is located in the Cloud Peak Wilderness which requires a self-issue permit for day use. It is sometimes mistaken for the more popular Cloud Peak, being easier to see from Highway 16 and from the town of Buffalo. It's elevation is 12,324'.

Bighorn Peak is not climbed as often as one would think based on its spectacular scenery. This is likely because it requires at least 4.5 miles of off trail travel through rugged terrain, much of this hopping between large boulders. The most popular way to approach Bighorn Peak seems to be from the east, from Circle Park Trailhead. Roundtrip mileage from here is around 18 if you take the most direct route, 9 miles for the ascent only with just shy of 5000' of gain. You may also be able to approach from West Tensleep Lake or Maybelle Lake. Any gps track for this route should be taken as a general guide, not an exact route.

Coming from Circle Park you take trail #046 to trail #090. This gets you about 4.8 miles, to the shore of Old Crow Lake (not on some maps). At this point local knowledge becomes very important. The north side of this lake has a good game trail that heads WNW toward Lame Deer Lake. At some point you need to cross South Clear Creek and make your way up one of the 3 distinct ridges on the east side of the peak. The central one seem like the best option. The north ridge has a notch in it that would likely turn this into a technical route. I took the central ridge, which has an incredible amount of large boulders. It is likely quicker to stay just south of this ridge for as long as possible to avoid some of the boulders, even though this adds some distance.

This is truly a spectacular peak and should not be underestimated. 6 hours would be a VERY good roundtrip time. Though not exactly a technical route, probably class 3, some of the boulders shift when you step on them. It would be easy to injure yourself if you weren't paying close attention. I would definitely recommend doing this with a partner, or at least telling someone where you're going. 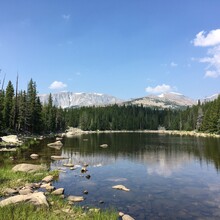 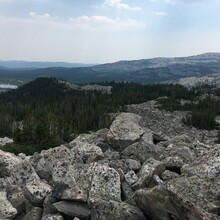 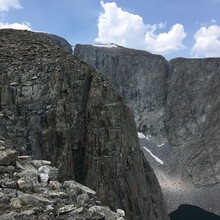 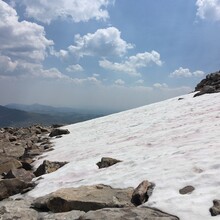 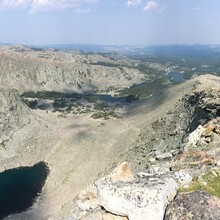 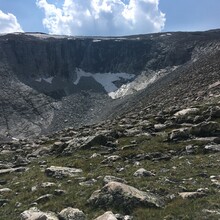