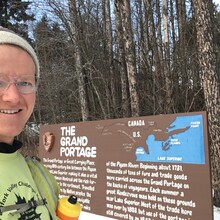 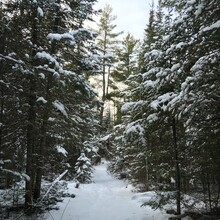 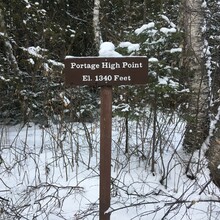 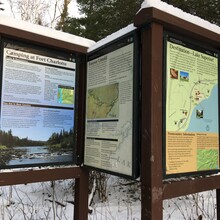 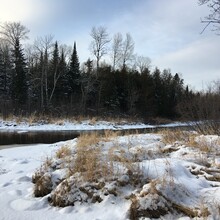 On December 16, 2020 I attempted an unsupported FKT of the Grand Portage Trail. I’m not sure why it took me so many years to figure out that a town called Grand Portage would have a long portage trail between Lake Superior and the inland waterways. It doesn’t show up on Trail Run Project but the trail itself is actually a National Monument and is in very good shape.

I started at 1:22 pm and it quickly became apparent that I wouldn’t be going very fast with the 4 inches of fresh snow. E to W is mostly uphill (one of the last uphills for Voyageurs coming from Montreal) and I slowed down for boardwalks that had a layer of ice on them, and for a few downed trees. I got to the Pigeon River at 3:08 (though my phone tagged it as 4:08 since I was so close to Canada), took a few pictures, then ran back to the start. The last 3 miles were with a headlamp. I consumed about 900 calories and a liter of water for the round trip. I didn’t see any people (or footprints) and didn’t have any Verizon signal, even in town.

I would imagine someone has run this trail faster, if not in recent history then probably during the 1700s when this was a major thoroughfare for the fur trading Voyageurs and Native Americans. In any case it’s a beautiful, secluded and historic area to go exploring.