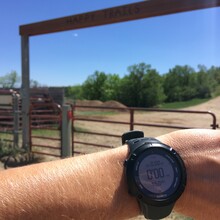 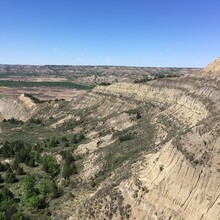 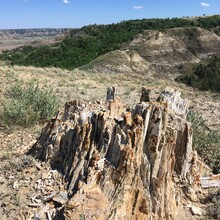 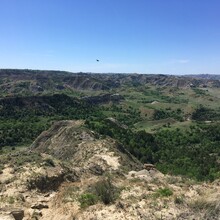 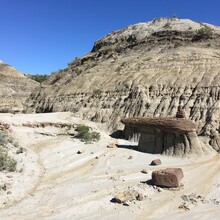 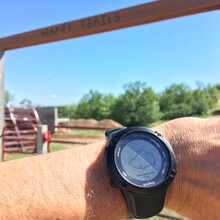 On Sunday, June 6th, I ran two laps of the Little Missouri State Park Outer Loop. I had run one loop a couple weeks before but it was cloudy and rainy and I wanted to see it in clear weather.

I started at 1:50pm (Mountain Time, Central is just across the river to the North) from the lower trailhead and again ran in the clockwise direction. The trail was much easier to run than before when it was wet. It had rained a little the previous night but the sun and wind had dried out most of the trail. I easily beat my previous time on the first loop (52:19, but it seems kind of cheap to submit an FKT for the single loop again) and almost beat it again on the second loop.

I took more time on the second loop to stop for pictures and to look at a petrified tree stump I hadn’t noticed before (see photo). The climb in the middle of this loop still amazes me even after running it three times. I can’t believe this ridge trail exists in North Dakota! I saw one small snake, two woodticks, and no other people. I ran unsupported (starting with 24oz of water) though it would obviously be easy to pick up more water/food after the first lap and do this self-supported.