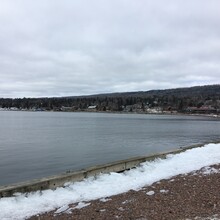 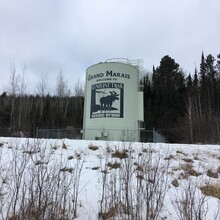 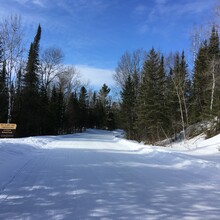 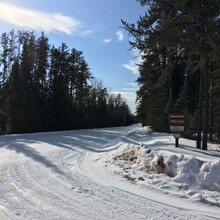 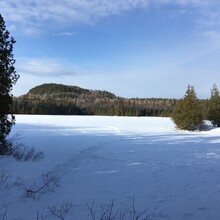 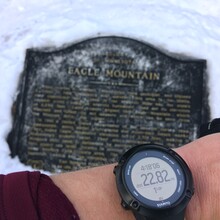 On March 4, 2021 I ran from Minnesota’s lowest point (Lake Superior) to its highest point (Eagle Mountain). I’ve been wanting to do this for a while. It’s very unusual for a states lowest and highest points to be this close. Once I realized how close they were (about 13 miles by air) I knew I had to make it happen. I spent hours looking at maps, finding publicly accessible land on the lake, and figuring out possible routes.

On Thursday morning I drove the four hours to Eagle Mountain Trailhead to drop off my bike. On the way I noticed that the road I had intended to take wasn’t plowed. I decided to take a route I knew was plowed, which changed my starting location and added about five miles to the run. I realized this would also likely mean I would be biking back at least partially in the dark.

I started from the rocky beach in Grand Marais at 11:41am. I started out at a steady pace, careful not to go too fast, realizing that most of the elevation gain would come in the first four miles. It was in the mid 30s, but I stayed more than warm enough with the elevation gain. It was a pretty uneventful run. The last 3.2 miles are on trail in the Boundary Waters. The snow was packed down which made for easy running. I reached the plaque at the summit at 4:59. I had consumed about 800 calories and 1 1/2 liters of water. I ran by myself the whole way, unsupported, passing 5 people who were coming off Eagle Mountain as I was going up. I started with all of my water, it would have been hard to find any to filter that wasn’t frozen.

Then I ran back down to the trailhead for Eagle and had a very cold and somewhat dark bike ride back down to Grand Marais. I definitely want to come back and try this again when there is less snow on some of the shorter routes.