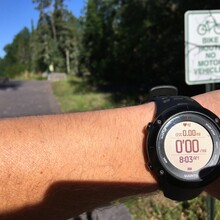 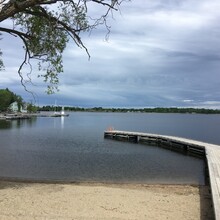 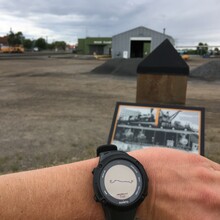 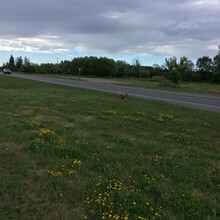 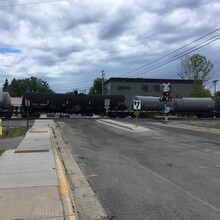 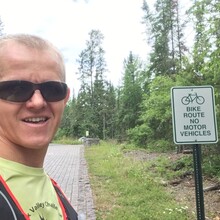 On June 22, 2021 I ran out-and-back on the Rainy Lake Trail starting at Voyageurs National Park. I started at 8:03 am. There was a frost warning the previous night so it was nice and cool. It stayed partly cloudy and in the 50s most of the day with a few sprinkles.

I started out mostly going for Kristoffer’s one way time. He had an average pace of 8:31 per mile so that’s what I was trying to beat. A few miles in I accidently ran a portion of the route on the south shoulder of the road instead of the bike path on the north side of the road. The paved bike path usually parallels the road, and often this route is on the shoulder of Minnesota 11. The westbound and eastbound runs had the same mileage on my watch (12.64 miles) and I wasn’t far enough off route for my watch to beep at me, so I don’t think it affected my overall time. Nevertheless, I was just over two minutes faster than Kristoffer, so to avoid any controversy this one way time won’t count. Future runners should be alert for this tricky area near Jackfish Bay. Its obscured by just enough trees to not see it if you aren’t paying attention. There was no established time for the out-and-back of this route, and nothing for it on Strava, so I’m comfortable submitting this as a time for it if the community is ok with that.

I got to the western terminus at 9:49 (1hr 46min 8sec). Then I ran back to my car. On the way back I saw a fawn and had to wait for a train. I got back to my car at 12:08. This is not a very fast time. I certainly prefer running on trails instead of pavement, the steeper and more technical the better. I’m sure a road marathoner will come along and destroy this time eventually. I consumed 500 calories and just over a liter of water, filtering some from the lake on the return trip. I saw two other runners. I ran by myself, unsupported.