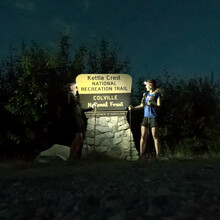 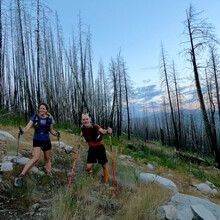 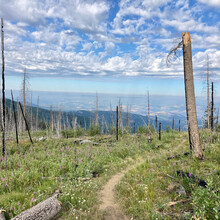 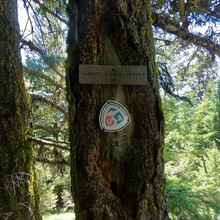 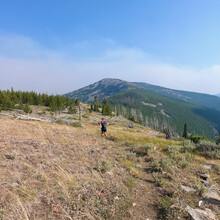 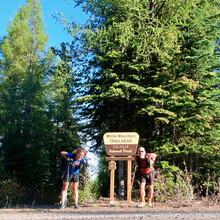 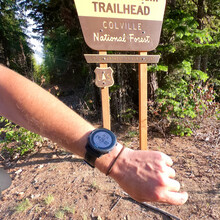 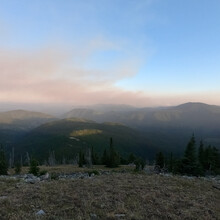 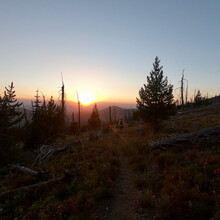 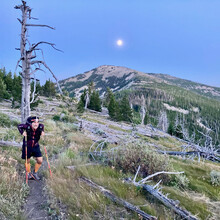 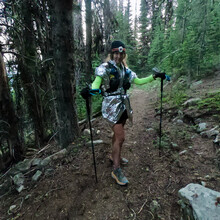 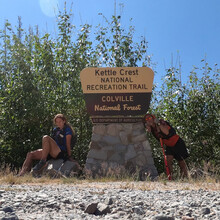 After a bright, brown, and (seemingly) endless drive, we quick-pitched a tent at Deer Creek Forest Camp, handily located just across the road from the Kettle Crest North TH. The 2015 Stickpin fire had destroyed all traces of forest, but the camp had been recently refurbished with gravel, picnic tables, and a satisfactory pit toilet. There were no bugs and a pleasant, smoky glow on the horizon when we turned in. Our plan was to start at at 4 a.m.

Though the night was luxurious, various complications—a plastic baggy breakfast, a miserably designed pack—delayed us until 4:20. Then, finally, we were off. It was a warm morning so we both left our rain pants and puffies in the car. Our packs, loaded with food for ~30h, were heavy enough, we surmised. Fueled by double-shot espressos, the moving felt easy. The fireweed was thick and brilliant, the dead tree trunks radiant, the trail meandering. Our sunrise introduction to the Kettle Crest was glorious.

We hit the first edge of the crest around mile 10 and the first spring at mile 15. There was residue on the dribbling PVC pipe and an algae crust on the trough. Still, Christof insisted the water was pure and potable. He did not filter and anxiously awaits cryptosporidium episode 2.0. Whilst Megan (prudently) filtered, he noticed that both his rain jacket and long-sleeve—previously stuffed under the outer elastic cords on his new Montane pack—were missing. What?! After deliberating, we decided it wasn't worth going back (possibly for miles) to find the lost items. The night was predicted to be warm, and Megan had both a long-sleeve and a rain jacket; we could each use one.

Onward we trundled. The trail fully lived up to its name, following the crest and offering sweeping and spectacular (albeit smoky) views of Ferry County. We stopped briefly to sign the summit register at Copper Butte, the route’s high point (cleverly, there was a joint stashed with the register in a tin can). The views continued to amaze us as did the outstanding trail maintenance. For such a remote route, the tread was remarkably clean, and we only remember crossing two downed trees on the entire trip.

The least scenic section was the State Highway 20 crossing, fortunately the only road crossing on this trail. Here dust billowed around wilting weeds and clung to our damp socks, and a few pointless and steep switchbacks temporarily turned us off. However, as we circled Sherman Peak, crossing a helpful stream and leaving the highway noise behind, our moods improved. After Sherman we climbed around Snow Peak, finally closing in on White Mountain and the southern TH. Somewhere in this section we spotted a massive smoke plume, appearing to be just a single ridge away from our destination. We watched the plume grow and spread for hours. It did not creep close enough to end our adventure, but we were worried for miles.

After skirting Snow Peak, we trudged over the infuriating Barnaby Buttes, kicking fresh bear scat with irritated and reckless abandon. The final ascent, both breathtaking and maddening, climbed White Mountain. It traversed a rocky slope, passed a murky spring, then plunged intensely to the southern trailhead. As we descended (hungrily, gingerly, suspiciously) we had trouble accepting the impending return. Fortunately the trailhead appeared sooner than expected. After 14h25min, we photographed ourselves with cautious joy. Next, we sat for a moment to reset and refuel—Christof with soon-to-be-regurgitated plastic baggy meals, Megan with waffles and cherry pies.

Then we headed back. Night arrived and the moon rose impressively. On the north side of Barnaby Buttes a bear dashed across the trail. As we climbed back around Snow and Sherman peaks, the wind stiffened and cooled. Megan donned her long-sleeve, Christof her jacket. Soon thereafter, we added hats and gloves. As we climbed out of Sherman Pass, the wind turned arctic and harsh. Megan shivered. Christof stumbled. The higher we climbed the colder and sleepier we became.

For an eternity we struggled to stay upright. Around 2 a.m., we decided a trail nap was necessary. We rolled up in an emergency blanket and passed out immediately. After close to 10 minutes Megan jolted up thinking she heard a bear. Though it turned out to be only Christof's stomach, the nap wasn’t salvageable. As we continued, Megan—having shared her jacket with Christof—began feeling dangerously cold, so she used the emergency blanket as a shell and we both moved furiously. The wind continued to howl and temperatures dropped even more as sunrise neared. Neither of us was warm enough.

We met the first PNT through-hiker just after sunrise. Maddeningly, he was bundled up in a down jacket and various other cozy layers. We asked whether he’d seen any lost clothing on the trail; aha, he had! With some optimism, we hurried on. We hurried for miles, searching the brush and finding nothing. By the time we discovered Christof's long-sleeve, the sun was high and hot. We never recovered the rain jacket.

Soon after passing the final spring, we were marinating in sweat and dust again. We met a second PNT through-hiker, who looked fresh and like he'd just bought everything new at an REI just around the corner.

While Christof was hoping for an 9 a.m. finish, Megan predicted 11. We were both wrong. The last 8 miles were interminable, dusty, brushy, hot, dry, and, relentless. The dream flowerscape of our first morning had retreated. Eventually, after some grumbling, teeth-grinding, and silence, the trail spit us out at the trailhead. We were done in 31:49:40. It was just after noon.