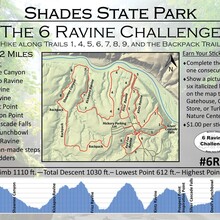 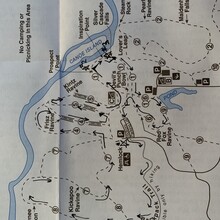 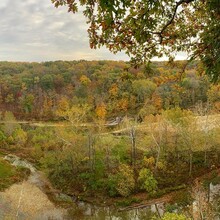 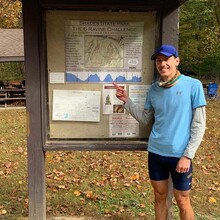 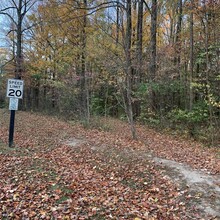 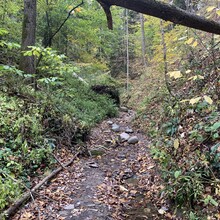 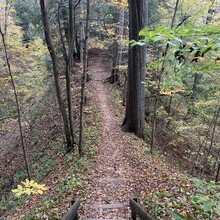 What a day! What an adventure. Proud of this one.

Warmup recon loop before was very necessary—made a wrong turn on that loop and also had to stop a few times to be ultra certain of the right way to do it. Also just needed the refresh on what each creekbed held and how to move fastest through it.

35 degrees at the start, warmed up a bit as I went. Started at 9:33am; busy day at the park but only saw a few towards the end of my effort.

Hauled butt on the first bit before hitting the first creek bed, then just tried to step confidently and press when I could. Same with the downhills on 4 and 5, the flat parts around inspiration and prospect, and the whole red fox ravine area.

For others who might want to attempt the FKT (or for myself another year): Lot of leaves down and all creeks were running; if I were to do it again I’d go 2-3 weeks earlier, which might gain me a minute or two. Better fitness wouldn’t have hurt either :). There are three really important route notes to make sure you hit the intended route. I've uploaded a crappy picture with numbered stars for each of the spots that tries to clarify the route for those interested. First, at the start, make sure to start very close to the west side of the hickory parking lot, even though there is an alternative further south that would cut time. (This is the picture with the speed limit sign). At the Prospect point area, there is a shortcut that cuts off the pointiest end of the trail out to the point, but don’t take this as it isn’t part of the intended route. Third, after inspiration point you must take the left turn down a big flight of stairs to the bottom of the ravine, then run up the creek bed. Staying straight (and on top of the ridge) instead of going down the stairs would theoretically give you a similar gps track but is not the intended route and would be cutting 2-4 minutes of stairs and creekbed running off. It would be possible to make these mistakes accidentally even with knowledge of the trails, so it’s vital to be aware beforehand and honor the challenge. Another thing: there doesn’t seem to be anything official on this on the FKT website, but I used the pavement on separate ends the hickory parking lot as the start and finish of the route.

Overall really happy with this. The challenge was exciting in a different way than just redlining something as hard as you could; the details of how to route this and how to be efficient on technical terrain is different but fun. I hope someone builds on this.

I love this park. I love this challenge and would recommend it to anyone.