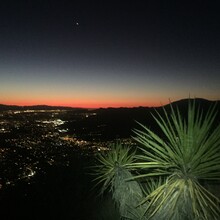 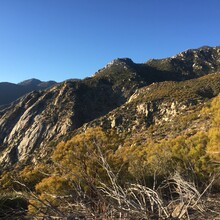 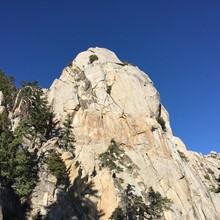 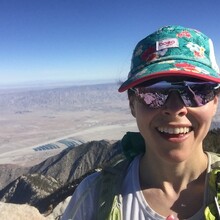 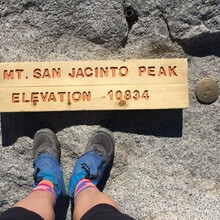 I started at 4:47 A.M. and was so grateful to watch sunrise when it came (6:00-ish), especially after seeing glowing eyes in the dark (likely a coyote). The trail was steep though fairly runnable until the last 2-ish miles before Grubbs Notch. This was the hardest section in my opinion because the trail is VERY steep and somewhat loose. I was also beginning to encounter some snow here and there. A Ranger popped his head out from the station after I dropped my Day Use Permit into the box to make sure I knew that the Tramway wasn't running (I did, which made the whole day extra committing!). He also warned me about the icy conditions between the station and Wellman Divide. The section was manageable on the way up and a sketchy gamble on the way down! I didn't bring microspikes -- definitely wanted them, so oops on my behalf. The summit was of course beautiful and I was alone. The way down, especially after Grubbs Notch, was really fun, but the yucca was harder to avoid! The majority of the scrapes and pokes happened on the descent, ha. All in all, this is definitely a world class experience. I've been aspiring to do the Cactus to Clouds trail ever since hearing about it when I was a student at UC Riverside (basically a decade ago). And I did not refill water at the station; I carried my own water the whole way.