"San Jacinto Peak 10,834 feet (3,302 m) is the highest peak of the San Jacinto Mountains, and of Riverside County, California. It lies within Mount San Jacinto State Park. Naturalist John Muir wrote of San Jacinto Peak, 'The view from San Jacinto is the most sublime spectable to be found anywhere on earth!'

San Jacinto Peak is one of the most topographically prominent peaks in the United States. It is ranked sixth among peaks of the 48 contiguous states."

A third route was submitted by Matthew Robison, ascending San Jacinto's North Face via Snow Creek bypassing Desert Water District (the purple line on the attached map).  The ascent is about 8 miles with 10,000 feet of elevation gain.  For the up & down, you can ski down as far as you can, which will make your trip "multisport".

Note if you are attempting an FKT on the C2C (ascent) you will need to be sure you beat the fastest ascent time set in the more-popular C2C2C!

A further challenge was submitted by George Katsikaris.  It involves traversing San Jacinto from Idyllwild to Palm Springs & returning the same way, touching the summit each time. The out & back traverse is about 45 miles. This is shown on our map, as it also includes the C2C route. 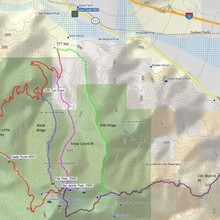 This route on the old FKT site
http://fastestknowntime.proboards.com/thread/49/cactus-clouds-skyline-trail-spr…

I'm planning to climb from Palm Springs up to the tram station tomorrow, very tentatively (pending conditions and other things) looking at continuing to the summit and running back down to town for the first female FKT on the C2C2C route.

San Jacinto summit and C2C2C round trip complete in 13:30:04, will submit details when I get to my computer.  An excellent adventure!

First time commenting. My husband and I are in Palm Springs and planning to hike C2C2C (museum to summit to museum) tomorrow, Feb 19. Not sure of conditions, but perhaps the women's record is within our reach. Carrying my own gear but will be accompanied by my husband. Hopefully we'll have a nice hike and we'll check back in when we're down.  -Anne Fox

Successful women's FKT on C2C2C (Palm Springs art museum trailhead to Mt San Jacinto summit and back) on Feb 19, 2020. Left a little before 5am. Started with a moderately fast hike from museum to Grubs notch. Conditions and temps were great until about 1000ft from the notch when the trail became hard-packed ice and somewhat tricky going. From notch to summit was all snow and ice but easy to follow boot pack. Ran into Ricky Gates at the summit and enjoyed a few miles' jog with him on the descent before he dropped the hammer. Ran a steady pace on the way down except where conditions didn't allow. Put in a solid push the last 5 miles. No surprise but the trail was as brutal and beautiful as advertised!

Gear: micro-spikes, hydration pack, hiking poles. Carried all my own food and gear and was accompanied the whole way by my husband, Sam Fox.

What constitutes a “self-supported” effort here? Maune does not mention staging or cacheing aid. Is using the water pump at the ranger station enough to merit the self-supported style?

According to the FKT guidelines, public taps are still in line with an unsupported effort. Marcy Beard mentioned getting water at the pump and submitted as unsupported, but her effort was posted as self-supported. My guess is that it's because you're getting water at a ranger station, which is akin to getting it at a store. The guidelines state that if you're getting water from a store (even if it's free) it's considered self-supported. I'd be curious what the admins have to say about it though.

I also don't have a solid answer, except that some older FKT's perhaps didn't have the guidelines clearly established yet?  So anyone doing the same thing as previous runners will get put into the same category.  Not sure if there's an obvious fix for this.  At a minimum, I would suggest being clear about what you do, to make it easier on the admins to try to figure things out.

Sure seems like people are just getting water from the ranger station, and that would generally qualify as unsupported (even though they are being listed as self supported.) I would say that is the standard style that has been set for this FKT, and others should simply follow it.

Am I seeing this wrong or is there no FKT for the traverse out & back? Thinking about going after it this year so double checking. If not, when was the route proposed?

This was not a true FKT attempt but I still wanted to submit because we are happy with the time for a first effort, there was a lot of “hanging out” mixed into the day (2 hours or so). Andrew, Dan and myself (all Idyllwild locals) started around 630a from the museum parking lot, pace was pretty hot out the gate. I had to back off around mile 7 when the grade ramped up. Filling up water at the ranger station provides a really convenient checkpoint as it is about 10 miles in, then another chance to fill up on the way down, also a 10 mile interval. It was a great day overall with a good amount of snow above 9000 however it was pretty manageable. My legs seized up around mile 11 and that really slowed me down to the peak. The way down was very pleasant overall and the last couple miles were tough but we were so happy to be back it didn’t matter. Major props to anyone who has done this route and especially to the fast ones out there! We will probably give it a proper “go” in the fall or next spring. It’s a shame the trail isn’t more runnable, there’s a lot of potential but it’s tough to maintain Skyline so it is what it is. Go get it!

Starting at 4am tomorrow (right after I get off a red-eye flight) Rob Manley and I will be attempting George Katsikaris' proposed double traverse pictured on the map of this route. We will start and end in PS.

A live tracking link can be found here: https://maps.findmespot.com/s/J5BS#history/assets from my Spot X tracker

We will attempting to go completely "unsupported" on this effort, so in keeping with the established norm on this route we will not refill from the ranger station as that has designated previous efforts as "self-supported"

Our live tracking link will be here:

I forgot to pack my Spot X

San Jacinto Traverse, out and back = Success!!

Thank you those who followed and cheered us on Rob and my Instagram and via the live tracking!  Our double traverse went in 17hr 01min 55sec.  We were successful in keeping our effort "unsupported" filling only from springs on route. Trip report and official submission on its way.

We wanted to give Chad and Marquis to submit first since out of all the years this route has sat uncompleted, our two teams did it on the same day.  They started about 8.5 hours before us and finished in 22hr 22min 22sec, meaning they officially snagged the first finish and OKT on this route by 3 hours ?!  Wild! Mad props on a brutal go of it!

I am going to try to do the C2C2C route tomorrow Oct 22 2021. I have a very low chance of getting the record, but I'll at least give it a shot and see where I am at by the tram. I've never been to the mountain before, so perhaps making it to the summit at all should be the goal. Either way it should be a fun morning.

The route shown going up Snow Creek is the old, now illegal route up the ithmus.  The new route starts further northeast, and stays east of section 33.

Does anyone have or know anything about FKT information for C2C or C2C2C for 70-80 and 80 plus year-old folks?

Hey Dave! Since FKT doesn’t keep track of age groups at this point, your best bet is to check the Strava age groups for the C2C or C2C2C segments. If you have other related questions, you can ask me on IG. @robmanley