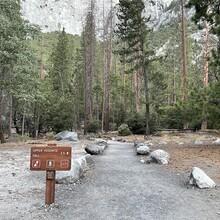 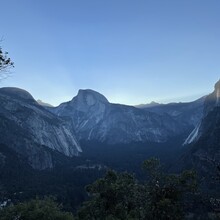 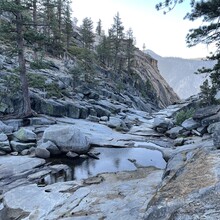 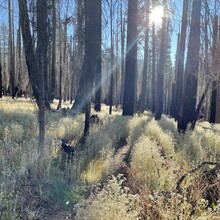 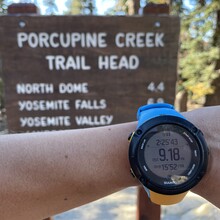 After a warmup jog, I started from the TH (edge of Camp 4) and made my way up! Not too many people on the trail this time of year/morning/week, but the smokiness was a tad more than I was hoping it would be. Nonetheless, my lungs did okay and I reached the top Yosemite Falls junction at about 1h 1m. The trail past Yosemite Point was a little hard to see (there were many options that seem to all go in the same general direction), but higher up everything became less rocky and was very really easy to follow. A long, flowing descent was a welcome surprise and then the last couple miles were fairly steep again. The trail became paved for the last half mile or so. Reached the Porcupine Creek TH sign at 2h 25m 43s. Really great terrain and beautiful forest/vistas.