Yosemite Falls Trail is "one of Yosemite's oldest historic trails (built 1873 to 1877)". The trail leads from the Valley to the top of North America's tallest waterfall, which rises 2425' above the Valley floor. The trail climbs about 2700' in 3.6 miles.

This route has a Strava segment, but note that these data aren't very accurate, so runners should report their actual time (as read from a watch), from the trailhead sign to the top (trail junction sign).

The "Valley Escape" variation doesn't go to the actual falls, but continues beyond & out to Tioga Rd, about 14km total (one way), basically all uphill.

Routes should begin at the Lower Yosemite Falls Trailhead. 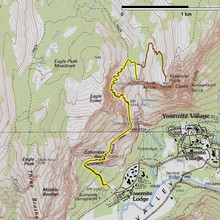 This route on the old FKT site
http://fastestknowntime.proboards.com/thread/1282/yosemite-falls-trail-ca