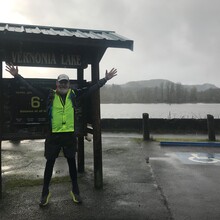 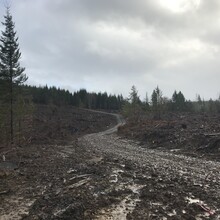 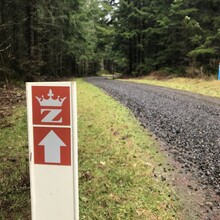 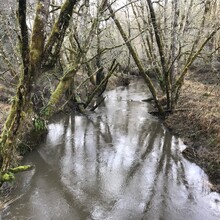 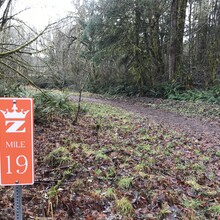 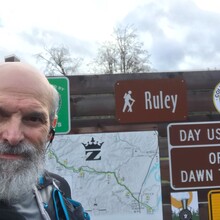 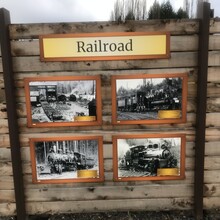 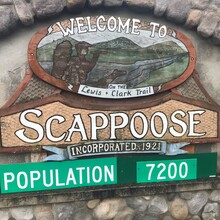 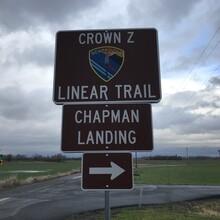 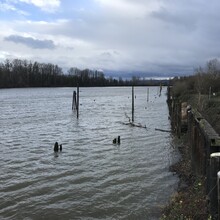 I just recently discovered a new rail trail in Oregon called the Crown Z.  As a big advocate of converting old rail track into walking, running, biking paths, I was excited to go explore this new trail.  This would be my last big run of the year, and what better time than on the winter solstice, the shortest day of the year.

My son Jesse, was kind enough to follow me out to Scappoose, where I parked my car near the Chapman Landing trailhead.  Jesse shuttled me up to Vernonia Lake where I started my run.  I had decided to start at Vernonia Lake because I could get the harder section done first, and have a long downhill section back to the Columbia River.

I started my gps watch, and set out in the rain at 10:11 am on my long run back to Scappoose.  The first couple of miles are really not a trail, but follow the Nehalem Highway North, with a right turn onto Knott Street where the road ends at a gate.  There is a gravel road that goes on past the gate and up into the mountains, but no trail signs.

The logging road was super muddy and steep.  The road ended and I followed a trail a short ways back into the timber.  The trail came out onto another logging road with thick fresh gravel that was kind of hard to run over.  I followed this road, and tried to ignore the side roads I came across, still wondering if I was going the right way.  I had now run more than 4 miles, and to my relief, I finally came across a very small little Crown Z sticker on the side of the road.

It had been slow going up to the top, and it felt good to let loose downhill.  I passed another gate, and crossed the Nehalem Highway.  The rest of the trail was much easier to follow, with more little Crown Z stickers, and big Crown Z mile markers.  It was now easy to tell that I was following the old railroad track.  It was nice and wide, with gentle slopes, and big long sweeping curves that a train could easily travel.

For the most part the Crown Z rail trail stays away from the main Highway, and travels through nice forest with a number of foot bridges across streams.  It does cross some country roads along the way, but it was pretty easy to follow.

There was one more big climb over the mountains.  I reached Nehalem Divide, the highest point on the CZ Trail at 1,199’ and started my descent into the little town of Scappoose, population 7,200.  I only saw a couple of people on the entire trail.  The last several miles of trail into Scappoose follow along the highway.

I crossed the Columbia River Highway, and the Crown Z signs and trail totally disappeared.  I was now running along a big neighborhood street, lined with houses and sidewalks.  In less than a mile I came to new little trailhead parking area, where the trail picked back up, but there were still no signs indicating that I was on the Crown Z trail.

The last couple of miles were along a super wide paved path that goes straight as an arrow for a long ways.  I was really grinding it out and trying to break 4 hours for my total time.  The official end of the trail is at Chapman Landing on the Columbia River.  The trail passes over Dike Road, and finally comes to an end at the river.  I finished in 3 hours 59 minutes, and 49 seconds.  I had broken the 4 hour mark, and it was now time to celebrate.