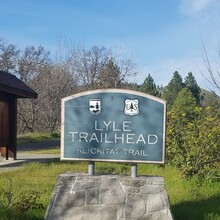 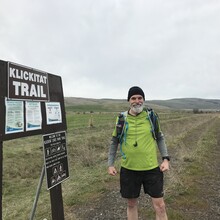 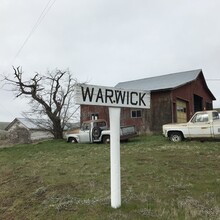 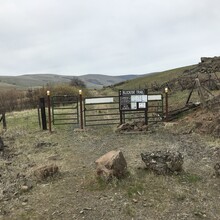 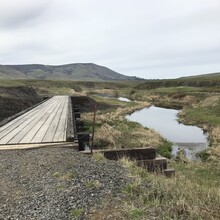 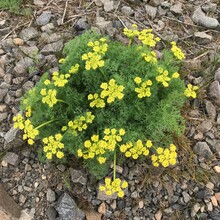 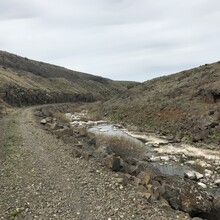 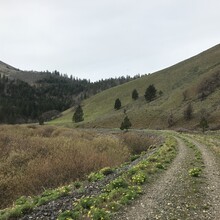 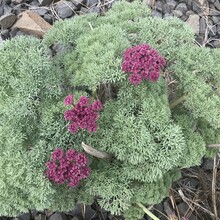 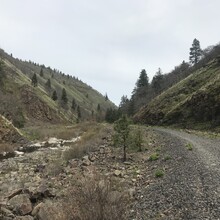 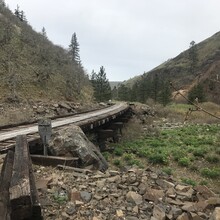 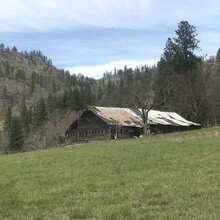 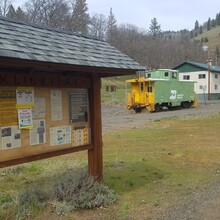 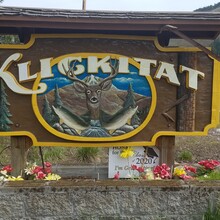 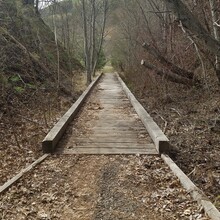 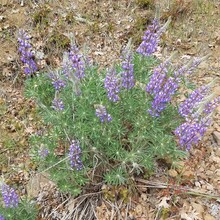 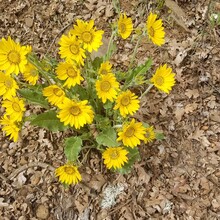 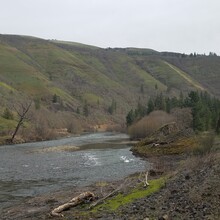 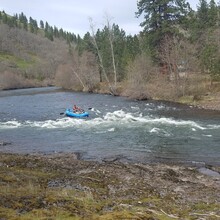 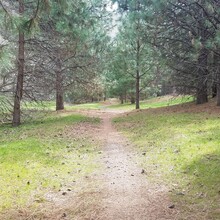 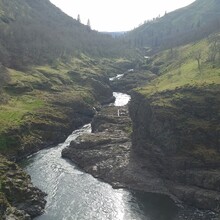 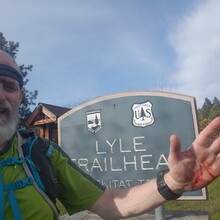 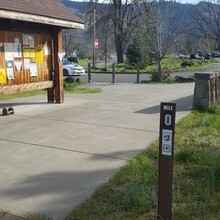 I find these old railroad lines very fun and interesting, and enjoy the stories they tell about our history.

I strongly support the Rails-to-Trails Conservancy who are the driving force behind converting old abandoned rail lines to paths for hikers, bikers, runners and horses. These rail trails truly are a national treasure.

The word “Klickitat” actually derives from a Chinookan word meaning “beyond,” referring to people that lived on the other side of the mountains.  The Klickitats were a Native American tribe that inhabited the areas along the Klickitat River for thousands of years.  Lewis and Clark encountered the Klickitat people in their historic expedition in 1805.

The Klickitat Trail is a 31 mile section of the old Columbia River & Northern Railroad Line that began running in 1903 between Goldendale and Lyle in south central Washington.  It carried wheat, timber, livestock and supplies to steamships on the Columbia River.  It stopped running when the Klickitat lumber mill closed down in the early 1990s.  The Conservancy purchased the line in 1993 and donated the entire section to the Washington State Parks.

I’ve been planning a springtime run of the entire trail for over a year now, and was finally able to make it happen on Saturday April 3, 2021.  I had read about how rough the gravel and rock sections of this trail are, so last year I drove to several of the different trailheads and hiked a couple short sections to get a better idea of what the area was like, and if it was actually going to be runnable.

My son, Jesse, was kind enough to once again act as shuttle driver.  I left my car at the Lyle trailhead, and rode with Jesse to the more remote end of the trail that starts on Uecker Road in the open high prairie of the Golden Plateau.  There are no parking spots here, and the only sign indicating that this was indeed the Klickitat Trail had blown over an was laying on the ground.

We had a good laugh before Jesse drove off, because he finds it so strange that he keeps driving me out to the middle of nowhere and dropping me off.   He wished me luck and said, “I guess you will be okay, because somehow you always find your way back home”.

It was a mostly cloudy day, but warm for early April, and the forecast was good with temperatures to reach the mid to upper 60’s.  I had chosen to start at the more remote upper section because it was all downhill to the Columbia River.  I did my stretch and warmup routine before setting off down the old overgrown rail line.  It was obvious this section hardly ever gets used.

After a short half mile I reached Warwick, and a cattle gate with the Klickitat Trail sign info.  I latched the gate behind me and continued across the prairie.  I scarred up several ducks and passed through a couple more gates before reaching the Harms Road Trailhead.  There were two cars parked here, and this is much more of an official trailhead than where I started on Uecker Road.  There was even a porta-potty.

It was a lovely morning for a long run, and the trail was good.  I passed through another gate, and crossed one of the many old wooden railroad trestles along the route.  I saw lots of ground squirrels and even a big marmot as I continued along the creek.  It wasn’t long before I entered Swale Canyon, with its basalt cliffs and sweeping green hills high above.  The sides of the trail were covered in bright yellow clumps of desert parsley.  This was probably my favorite section of the trail.  It was very remote and I was all alone for this 12 mile section down the twisting canyon to the settlement of Wahkiacus.

As I neared the Wahkiacus trailhead, I passed half a dozen old shacks, cabins, trailers and abandoned old shot up cars.  There is private land along both sides of the rail trail here.  Kind of an interesting area.  I reached the gate at the trailhead, and found the dead end section of trail leading to the missing trestle over the Klickitat River.  This is the point where you need to detour along state route 142 for 3 miles to join back up to the trail in the town of Klickitat.  There were very few cars, and it was nice to run alongside the river.

I arrived in the little town of Klickitat, population 362, and found an old Burlington Northern train caboose marking the spot where the trail picks back up.  I stopped at one of the picnic tables here to eat and energy bar, and switch water bottles.  The day had warmed up nicely and the sun was coming out, so I put on some sunscreen and changed to my short sleeve shirt.

I followed the trail to the end of town which continued on between the highway and the river for about 3 miles to the Pitt bridge and trailhead.  I found both lupine and balsam root in full bloom along this section of the trail.  I crossed the road at the Pitt bridge, passed another gate, and entered the more secluded west bank section of the lower Klickitat Trail.

The trail continued past some dilapidated old homesteads and what’s left of a wooden footbridge over the river.  I found mile markers starting at mile 9, and I continued along through nice sections of white oaks and ponderosa pines.  I spotted a raft on the river near Ishi-Pishi rapids, and we were moving about the same pace.  It appeared to be a dad and his daughter, and their dog out for a fun day on the river.

The only other trail runner I saw all day caught up with me and we spoke for a moment.  He was also by himself, on a 24 mile out and back run, and moving faster than me.  It was only moments after he passed, that I came to a section of basalt cliffs and began to negotiate a rock slide area, when disaster hit.  I caught my toe on a rock and took a hard fall, head first into a pile of jagged boulders.  It happened so quick that I couldn’t even turn my head.  I slammed the rock so hard it gashed my forehead open and blood came gushing.

I knew I was hurt bad, so I yelled for help to the guy who had just passed me.  Lucky for me, he heard my calls and came running back to see what happened.  I could tell from the expression on his face that it wasn’t good.  I was trying to pull my first-aid kit out of my running vest with blood dripping on everything and asked if he could help me put some bandages on to stop the bleeding.

A group of mountain bikers showed up and asked if there was anything they could do, but at this point I just needed to get back to my car and go to the Emergency Room.  Both hands were cut up, as well as my right leg, and I was pretty sure I had a cracked rib, again.  It wasn’t good, and I was so upset with myself for loosing focus, and not slowing down through that rocky section of trail.

Richard from Corvallis was the trail runner who was so kind to stop an help me.  I told him that I thought I could walk out the rest of the way, but he walked with me for about a mile to make sure I was going to be okay and make it out on my own without fainting or something.  I assured him I was going to make it and he reluctantly went on to finish his run.  I owe Richard my sincere debt of thanks and gratitude for coming back to my aid.

Wow. My perfect day on the trail was now in shambles.  My head was throbbing, and my right hand was swelling up, and I was on a death march back to the trailhead where my car was parked.  I kept walking as fast as I could, and knew my efforts to set a fastest known time were a bust.  The good pace I had set for the first 25 miles had now been drastically reduced, and my run had turned into a supported run with the help from Richard, but I really didn’t care.  I just wanted to get back to my car.

I came to the Fisher Hill Trestle, and passed 2 mountain bikers who must have seen how bad of shape I was in and they both offered to give me water or help me.  I thanked them for their kindness, but assured them I would make it back to my car.  I kept trying to walk faster, and even jogged the last mile in an effort to try and finish under 6 ½ hours, but alas I was too slow.  I finally reached the Lyle trailhead with a total time of 6h 31m 31s.

It was a long 2 hour drive back to my local hospital in Portland, where I received excellent care from Dr. Julia Bullick, MD in the Kaiser Sunnyside Emergency Room.  She cleaned my wounds, put 3 sutures in my forehead, took x-rays of my ribs and hand and was very caring and compassionate.  I so appreciate the care she gave me.

I drove back home to find my warm bed, where I could rest and recover.  It had started out as such a promising day, the trail was good, the weather was great, and it only took a split second to totally change my day.

Yeah, you bleed just to know, your alive.

And I don’t want the world to see me

‘Cause I don’t think that they’d understand

When everything’s made to be broken

I just want you to know who I am

Sorry to hear about the dramatic events.  The good news is: still an FKT. :-)

Also, appreciate you starting at the "remote" end of the trail to set this route.  Looking at it several times, I think it would be bad news to start in Lyle and get in trouble somewhere out in the Swale Canyon area, after 15-20 miles of running, where access would be difficult.  Also seemed like Uecker Road, even if less "formal" than Harms, was described as the current east end of the line when I read up on it.