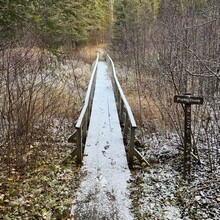 First snow of the season. Trail has roughly a full mile of boardwalks which became very slippery. Deceiving elevation changes. Ate a gigantic breakfast and jogged 8.5-ish miles to start things off. Walked around a bit once I made it to halfway and also ate a gel. Didn't drink anything. Fairly cold but by my estimation it was nearly 40 degrees by the end. Way back was much faster and most of the snow had melted.