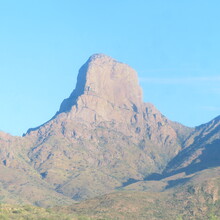 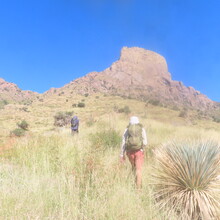 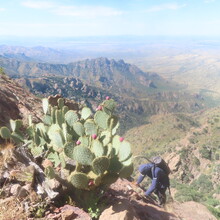 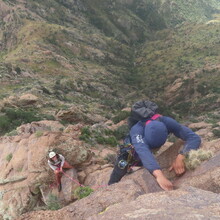 Ethan, James and I left the car @7:30am. Unfortunately we could not drive all the way down the dirt road so we faced a 3.5 mile road walk just to get to the Baboquivari Ranch. On the way in we were passed by border patrol and the guy offered us a ride to the end of the road. This instance was one of the most obvious displays of benefiting from my whiteness. Despite our reservations of being associated with BP we took the ride because it saved us quite a bit of time.

Once at the ranch, I started the gps tracking. There was a faint trail that soon became engulfed in sharp catclaw acacia and mimosa shrubs. James and I wore shorts and our legs were literally bleeding with cuts from bushwacking through the prickly plants. Ethan wore pants and repeatedly reminded us that we had f'd up. From the drainage we shwacked up the steep ridge to the southeast arete. At the base of the climb we snacked, rested and took in the beauty before climbing.

James and Ethan roped up while I scrambled up solo style. We kept a steady pace with watchful eyes on the imminent approaching storm clouds. At the summit we left gifts for the spirit as is customary. We got a bit lost on the descent and ended up losing about 40mins but eventually got back on track. From the bottom of the forbes route we followed another faint trail back into the drainage and took it to the ranch.

This is an awesome adventure! I am curious to see how fast it goes because while it is shortish in mileage, its quite burly off trail traveling. This was a casual attempt so there is still lots of room for improvement!