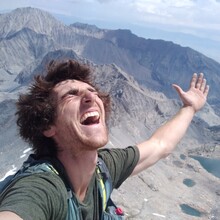 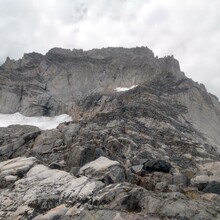 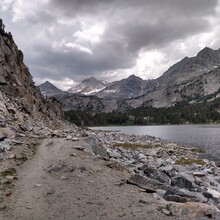 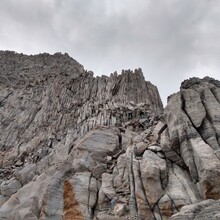 It was supposed to thunderstorm in the afternoon so I set my alarm clock for 4:20am the night before the FKT attempt. Unfortunately, due to an unexpected late night of jamming with the homies, I overslept. I reached the trailhead around 9am and put my approach shoes on. I started running at 9:35am.

As soon as I began I realized I was feeling heavy and sluggish. Maybe I had been over training, or not training enough, or perhaps it was the dull overcast sky bringing down the vibe. On the approach I accidentally got off route and found myself ascending this rocky ridge. It was slow going, and I even encountered some easy 5th class moves. I envied being down by the lake which I think is the normal approach.

Regardless I reached the ridge and just kept at it. My heart was pounding abnormally loud, probably because the sudden change in elevation, so I took a couple minutes to catch my breath. The top of the ridge had some fun climbing, however most of it was easy 5th class. That's ok because the summit revealed spectacular views. I hung out on the summit block for a bit. It had taken me 1:54 to reach the top from the car.

Heading down was more challenging and slower than I expected. Those rocky talus slopes can be treacherous. I stepped gingerly from rock to rock and eventually got back to the trail. From the trail I dug deep and kept one foot in front of the other. When I got back I immediately jumped in the cold creek. It felt heavenly. Then the rain started. Perfect timing. Overall this was a difficult attempt. I wasn't feeling my best and wasn't quite mentally stoked as I usually am. Oh well, that's life I suppose. Some days are great and others are tough.