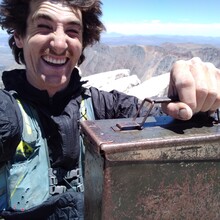 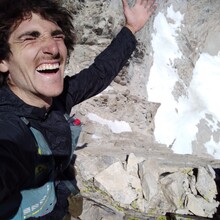 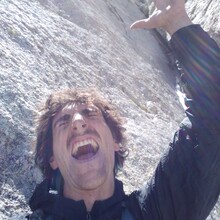 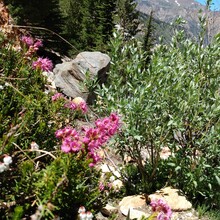 On my way to Tahoe the Matterhorn captured my imagination. It's perfect triangular symmetry and striking granite arete stands proudly over the grassy knolls below. I promised myself I would be back to climb it. After spending nearly two weeks in the Tahoe area playing music gigs, climbing at lover’s leap, hanging by the beach, and recovering from a toe injury, I was ready to get back to the high sierra.

I left Tahoe around 6:30am and headed south. I arrived at Twin Lakes around 9am and packed my running vest. I was nervous about the snow I had seen at the base of the peak and unsure if my body was ready for the effort after little training. Nonetheless at 9:34am I laced my shoes and began running up towards the mountain.

It was not my intent to achieve any sort of speed record, I really just wanted to have a fun alpine adventure. On my way up I admired the variety of blooming flowers and cool waterfalls. But as I got closer I became increasingly intimidated. At the lake below the Matterhorn I considered bailing but figured I might as well reach the base of the mountain before making a decision.

As soon as I reached the base something strange happened. It was as if a fire ignited in my chest and my fears melted away. The arete looked incredible! Suddenly I yearned to cast out into the vertical world! I threw my climbing shoes on, took a deep breath, and forged up the blazing orange and white granite cracks.

The higher I climbed the more relaxed I felt. This was the experience I was seeking. At the 5.7 corner crux I was totally in the zone despite being 600 hundred feet off the ground and hanging on by only fingertips and toes. The movement felt effortless and I soon found myself at the summit. I wished the climb was three times as long! At the top I wrote a note in the summit register, put my running shoes on and galloped down the east gully.

I absolutely love charging downhill. I leaped eagerly from boulder to boulder down the talus slopes. Rainbow swirls from the flowers streaked across the trail in my periphery as I floated on by. At this point I was happy with the experience no matter the outcome, speed record or not. I had overcome my feelings of self-doubt.

Mountains are teachers. You cannot cheat your way to the top. You are forced to face the emotions within yourself if you wish to succeed. The Matterhorn taught me that from afar a difficult task may seem daunting, or even impossible. However if you take it in small steps, trust the process, a path will often reveal itself.

Eventually I arrived back at the trailhead and was surprised to have finished in sub 5 hours! I celebrated by getting cookie dough ice cream and coconut water at the small village store. And then discovered the true achievement of the day, a coconut water ice cream float! Seriously, try it and thank me later…