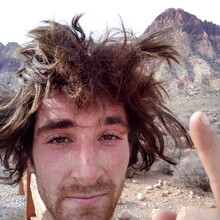 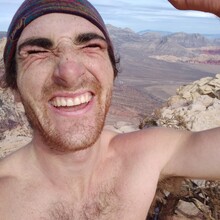 I'd been thinking about Rainbow Mountain for almost a year, basically since I first got into FKT's. Jason put it on my radar as a fun scramble adventure. Since I was in the Red Rocks area for a week I figured I'd give it a go. I scoped the line and tried to memorize all the twist and turns. This route is a lot of fun because you really need to learn every micro-scramble if you want to flow your way to the top. Quite engaging! Once I felt like I had a solid idea of the route I figured I'd give it a go! I hadn't really been running much the last three weeks so I wasn't sure how I would feel. I was living on the coast and had minimal mountain time but what the heck might as well try!

The route went really smoothly. I was moving fast for the first bit but definitely felt my lack of training at the top. I reached the summit in 45 minutes. Then I charged the downhill which was really awesome. The final trail run felt like forever but soon enough I made it back. Finished in 1:32. Very nice route, it definitely goes sub 1:30 to someone with better fitness/training, but still fun either way!