"Led by Sheep" [5.6yds] on Aries Butte is the one of the top-rated easy-moderates in Zion National Park, it has been likened to both the First and the Third Flatiron in Boulder, Colorado. While short in distance, it makes up for it in experience of Zion and technical vertical. It is certainly a worthy test-piece that is representative of the area. The route is located on the less trafficked East side of Zion. The East Side of Zion is another magical place of a very different variety, separated not only by a mile long tunnel, but by the nature of the landscape - rather than sheer walls, it is a land of smoothly swirling slabs gliding upward to softly sculpted pyramids.

Even since its first ascent in 2005, the route has seen a few speed runs, mostly by simul-climbers, occasionally by soloists. According to these broken records on mountain project and other places, it appears the approach had been done in 15 minutes from the tunnel, the route had been climbed in 20 minutes, the rappels had been done in 20 minutes, but there was no record of the deproach time.  So the first time established here exceeded those known marks en-route to establishing the full FKT

The FKT for this route starts and finishes at the "Pedestrian Tunnel" that passes under Hwy 9 - this is the most distinguishable start finish point for the FKT, start and finish under the mouth of the arch. Times are "Tunnel-Tunnel"

This route can be sandy so protection is recommended. There can be sheep moving above so helmets and keen awareness are recommended.

***** RAIN AND WET ROCK ***** The sandstone in Zion is fragile and is very easily damaged when it is wet. Holds rip off and climbs have been and will continue to be permanently damaged due to climbers not respecting this phenomenon. After a heavy storm the rock will remain wet, sometimes for several days. PLEASE DO NOT CLIMB IN ZION during or after rain. A good rule of thumb is that if the ground near your climb is at all damp (and not powdery dry sand), then do not climb. There are many alternatives (limestone, granite, basalt, and plastic) nearby. 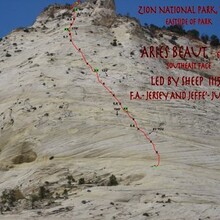 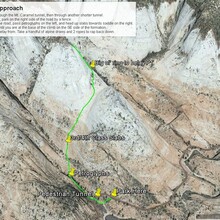 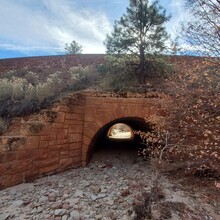