The Carmarthenshire Fans (Bannau Sir Gaer) are located in the Black Mountain range of the Brecon Beacons. Whilst often overlooked in favour of the taller peaks to the east, they are no less impressive. Though popular with locals, this range is less accessible than others and remains relatively quiet year-round. The range's highest point, Fan Brycheiniog, is 802m above sea level and the majority of the route is often snowbound in the winter months.

The route turns westward, continuing its ascent via a footpath to rejoin the Beacons Way on the Bannau Sir Gaer ridge.

Hugging the eastern bank of Llyn y Fan Fawr, the route follows the Beacons Way northwest, southwest, then westward, along the foot of the Bannau Sir Gaer ridge.

The route closes the loop at the northern tip tip of Llyn y Fan Fach, before turning northward to descend via the Beacons Way and return to the starting point at the Llyn y Fan Fach car park (SN 79977 23824). 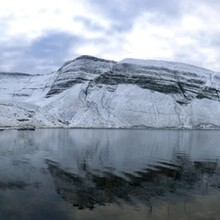 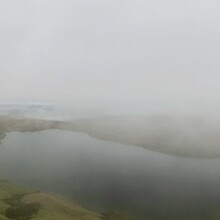 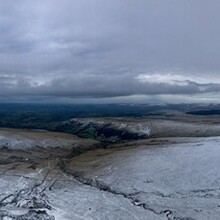 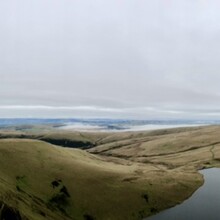