This route connects major canyons of the central Wasatch via some of the area’s most interesting features (e.g. South Ridge of Mount Superior, Wildcat Ridge), stunning views (from the summit of American Fork Twin Peak, Lake Blanche), and charming nooks (Neff’s Spring). No doubt many similar lines have been drawn; this one stands out as one of the more enjoyable and beautiful outings I’ve experienced in the Wasatch.

The route begins above American Fork Canyon and ends in Millcreek Canyon, covering just over 28 miles and 12K vertical feet along the way. A majority of the route is on runnable trails, although a couple of segments (descent from Twin Pk east and s. ridge of Superior) feature high-quality 4th and low-5th class scrambling (run + scramble = ramble). A couple of sections are off trail, with one taking a bushy, direct 900 ft line to the summit of Mount Raymond (no Wasatch route is truly complete without at least some bushwhacking straight uphill).

I started the route at Silver Lake Flat, just passed the Tribble Fork Dam at the head of American Fork Canyon. A runnable four-wheel-drive road allows easy access to a faint trail on the south ridge of Twin Peak east at about 9,400 ft, which can be taken to the Twin Peak east summit at 11,433ft. Descending the northwest ridge of Twin Peak east via exposed 4th class scrambling deposits one at the saddle just south of Snowbird’s “Summit” building/tram station. From the saddle, long switchbacks lead down into Gad Valley, where one can connect dirt roads and trails for the most direct route to the Alta by-pass intersection with Little Cottonwood Canyon’s S.R. 210.

The most engaging/fun route out of Little Cottonwood is Mount Superior’s south ridge, which is gained just up canyon from the Alta by-pass/S.R. 210 intersection. After some initial talus-hopping, the ridge offers a long enjoyable 3rd and 4th class scramble, with a couple of sections of low-5th class along the way. From the summit of Superior (11,037 ft), the route drops northeast into a beautiful hanging alpine valley, allowing easy passage to the popular (and gorgeous) Lake Blanche. The heavily trafficked Mill-B South Fork trail makes for a fast descent into Big Cottonwood Canyon.

The climb out of Big Cottonwood begins on the north side of S.R. 190 at the Mill B North trailhead. The trail steadily gains elevation via many switchbacks and long straight-aways. I left the trail at about 9,300 ft, where it intersects with the well-defined Desolation Trail, and headed more-or-les straight for the summit of Mount Raymond (10,197 ft), which offers an excellent view back up the drainage just descended. I then dropped more-or-less straight down Mount Raymond’s southeast slope, to connect briefly with the Desolation Trail and then the Wildcat Ridge.

One can ride the knife-edge Wildcat Ridge east, bypassing point 9,777 ft on the south, to the point where Neff’s Canyon intersects with the ridge. A look back from this point offers one of the more stunning views of the Big Cottonwood Ridge, running from the SLC Twin Peaks to Flagstaff Mountain. Dropping into Neff’s Canyon shortly leads to Neff’s Spring, where cool water flows from an old mining pipe in a peaceful, shaded nook. Shortly after leaving the spring, a traversing trail connection heading descender’s right leads below steep white limestone cliffs, ultimately connecting with the Thayne Canyon Trail, and ending at the South Box Elder picnic area, in Mill Creek Canyon. 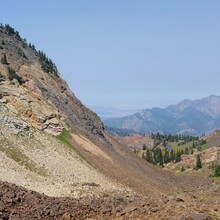 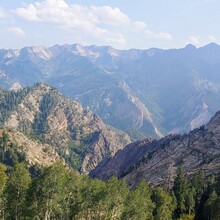 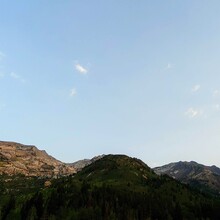 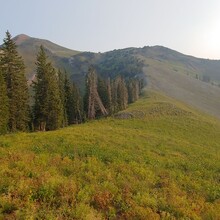 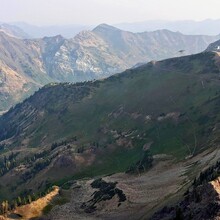 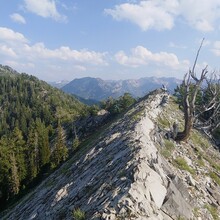