Chicago's many neighborhoods are linked by skinny stretches of parks that were planned and established as the city grew. Runners' favorite of these, the ones everyone knows about, are the Lake Front Trail, Lincoln Park, and Grant Park. But for urbanists, Chicago's Boulevards are far more interesting. They connect the city's West, Southwest, and South Sides and highlight some of the city's coolest and most diverse neighborhoods, architecture, and history. The Cultural Landscape Foundation describes this nationally registered historic district as the following,

"Consisting of eight parks, nineteen boulevards, and six squares, Chicago’s historic park and boulevard system comprises more than 1,700 acres of open space along 26 miles of interconnected roadways. In the 1830s, Chicago’s street grid was laid out by James Thompson and, in 1854, the first municipal park (Union Square Park) was established. In 1869, the Illinois legislature created the South Park, West Chicago Park, and the Lincoln Park Commissions to oversee the development of a unified arc of parks and boulevards. While the South and Lincoln Park systems were geographically contiguous along the Lake Michigan shoreline, the West Park system was to be connected to the others via Diversey Parkway—although this link was never actually implemented. Each park commission hired its own designers and the development of the system evolved incrementally. Although some of the boulevards followed the city’s grid, many were laid out diagonally, tracing the trajectories of canals and railroads. In 1934, the Chicago Park District was formed, consolidating the three park commissions and nineteen smaller districts into one agency. Between 1935 and 1942, the Works Progress Administration funded work in Chicago’s parks, with Alfred Caldwell providing oversight as the system matured.

Today, many of the parks and boulevards designed between 1869 and 1942 retain their historic integrity. Together with park systems in Brooklyn, Buffalo, and Boston, Chicago’s comprehensive system inspired similar developments in Minneapolis, Denver, Kansas City, and Indianapolis. Logan Square and Boulevard, along with other nearby squares and boulevards, were listed in the National Register of Historic Places in 1985. In 1990, the Historic Resources of the Chicago Park District was listed, and included many of the parks and boulevards designed during the historic period." (https://tclf.org/landscapes/chicago-park-boulevard-system-historic-district)

Though a universal sport, running in Chicago is often siloed to affluent neighborhoods downtown, on the North Side, and in Hyde Park. Making this a popular route would help normalize running throughout the city, including in underserved neighborhoods where running is not so common. Folks may be wary of running through Lawndale and Englewood because of their reputation for gun violence, but they are also beautiful neighborhoods and worth exploring. These are boulevards, not a bike path, so be wary of traffic and avoid rush hour if you can because of the air quality. This route follows the boulevards in the manner outlined by the historic district. It does not attempt to circle every park along the way.

Start at the Logan Boulevard Skate Park underneath the Kennedy Expressway, run west to Logan Square and head south on N. Kedzie Boulevard to Palmer Square. Continue east through Palmer Square Park and then south on N. Humboldt Boulevard. Run through Humboldt Park and south on N. Sacramento Boulevard. From Sacramento Square head west on W. Franklin Boulevard until you get to Garfield Square. From there you will run south through Garfield Park along N. Central Park Boulevard. Make your way west across the park and hop on Hamlin Boulevard to cross the Eisenhower Expressway. This becomes S. Independence Boulevard on the other side. Take it until you hit Independence Square where you will go a couple of blocks east on Douglas Boulevard into Douglas Park. Run south through Douglas Park and hop on S. Marshall Boulevard. Then east on W. 24th Boulevard before going south again on S. California Boulevard. You will get to W. 31st Boulevard which takes you east to S. Western Boulevard. Head south on Western, cross over the Stevenson Expressway and pass through McKinley Park all the way until you hit Gage Park. From there, head east on Garfield Boulevard, passing through Sherman Park and running over the Dan Ryan Expressway. You will get to Washington Park. Head north on S. Dr. Martin Luther King Jr. Drive until E 35th Street where the boulevard ends. Turn around and head south on MLK Jr. Drive until you get to E. Oakwood Boulevard which you will take east until you get to S. Drexel Boulevard. Go south on Drexel Boulevard until you return to Washington Park which you will run through, along its east side, until you get to Midway Plaisance. Take the Midway east to the old 1893 Columbian Exposition's main campus in Jackson Park. Take a lap around Jackson Park by following S. Cornell Drive south and then, before reaching E. Hayes Dr., taking the trails east around the lagoons and then north through Bobolink Meadow alongside the driving range. Then cross over 59th St Harbor and continue north around the Musuem of Science and Industry. Conclude your journey when you reach E. 56th Street. You can conveniently take the express bus or the Metra back north if you need to from there. You will have traced the entire Chicago Park Boulevard System Historic District on foot. (You may run the opposite direction if you wish.)

This is a variation of the Chicago Park Boulevard System Historic District route currently listed on fastestknowntime.com. David Hedges does a great job describing Chicago's Park and Boulevard system, which has become one of my favorite places to run in the city. As he mentions in his description, the West Park system was to be connected to the others via Diversey Parkway—although this link was never actually implemented, and the official boulevard map (attached) and signage actually do include Diversey as part of the official system. When the Chicago Park and Boulevard System was conceived, the planners meant for the city to be encircled by a string of parks and greenways, connected by Chicago's lakefront, nicknamed the Emerald Necklace.

-This loop can be run in either direction.

- The loop can be started at any point along the route, as long as you complete the full loop, which greatly increases the accessibility of the route. 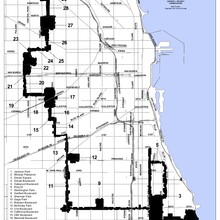 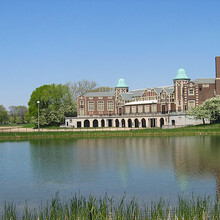 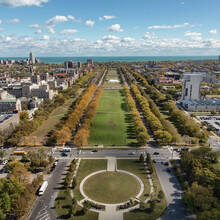 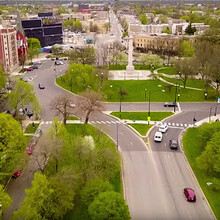 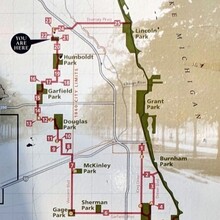 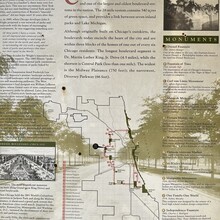 The north side system is a part of our regular running routes, but last summer, during the pandemic, we decided to really explore the west and south suburbs, and it was one of the more rewarding running experiences we've ever had. our longest run was a 'virtual' marathon, and we ran almost the entire boulevard system from our home in west Logan Square. We're not fast runners by any means, but just wanted to share how great this route is, and hope other runners start normalizing this route.

Correction - I meant south side neighborhoods, not suburbs.